Although the blog side of KPL has been relatively inactive for a large part of the year my ears haven't been. The real End of Year Listageddon is going to happen next week, but in tribute to those odds and ends that don't always get a mention, I've decided to acknowledge a few things that have been 2012 to Keep Pop Loud...

EP of the Year: Public Service Broadcasting – The War Room
Although not the strongest year for EP releases in recent memory, 2012 has supplied us with some cracking short form releases. Not least this incredible record by Public Service Broadcasting. When I last heard an act arrive as original and fully formed as this I really couldn't say. The use of public information films alongside their combination of electronic and live instrumentation results in something really rather rousing and feels both stately and new. A full album is due next year, but in the meantime this conceptual release is worth your time and attention.


Event of the Year – We release Bordeauxxx mini-album Only Fiction
I absolutely have to mention this in any run-down of 2012. Not (just) because I want you to buy it (I do), but because it is the single release that has taken up the most of my time in this or any other year. For a label that I'm running on such a small budget I'm immensely proud to have this in the discography. Bordeauxxx are terrific (and wonderful people too!), and have supplied us with great pop music in the past, Only Fiction however is the moment where they're really stepped up a notch or three. I was blown away when I first heard the rough mix of this, and the finished product is easily one of my favourite music things of 2012.
You'd probably think I was biased if I put it in the Best Albums of 2012 list though...


Compilation of the Year - Alcopopular 5: The Hit-Hikers Guide To The United Kingdom
When it comes to 'various artists' compilations you have to go a hell of a distance to beat Alcopop! Records in any given year. It came as something of a surprise then that come the start of December we'd still not heard the LONG promised 5th addition to the Alcopopular cannon.
Dropping in December it was certainly worth the wait. A 20 track beauty with a gorgeously designed map, it packs in pop hits like Tokyo trains pack in commuters. Highlights for me include Summer Camp, Fear of Men, Bos Angeles, Luke Barham (from Stagecoach) and Our Lost Infantry but you're handsome enough to pick your own favourites. Not only is this warming me up this cold cold winter but it's a great reminder of what I'd love Keep Pop Loud to be.

Gig of the Year - Pulp at Sheffield Arena, 8th December
I won't go on about this, because we could be here all day. But basically Pulp have been the most important band to me ever since I moved to Sheffield as a teenager. Their records give me feels. So many feels. And so did the gig. I'll admit to basically being in awe for the most part. Standing there in the middle of a 12,000 person crowd in semi-disbelief that yes, this is actually happening.
They opened with 'Do You Remember The First Time?'. They showcased their pre-fame years and threw toilet roll across a the arena. They played the big hits. Richard Hawley turned up. They bought out b-side 'Like A Friend' and the legendary 'Sheffield: Sex City'. They played an encore after finishing their main set on 'Common People'.
But facts, facts, facts. All to disguise the fact that Pulp get under my skin in the best possible way. All because I can't really find the words to say how great this concert was. All a crap way of me saying “I love Pulp!”. And I do. Their songs get to me like no other and having seen 24 of them performed live, and terrifically in the greatest city on the planet I can die happy. 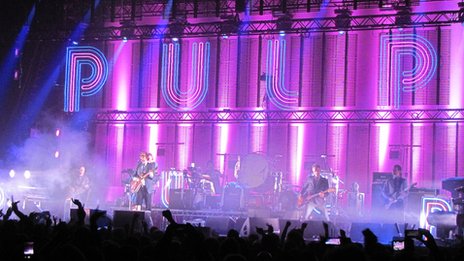