Big romantic pop that's all we could wish for. 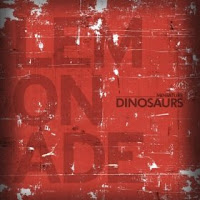 Now, at Keep Pop Loud we're not religious. But if we were to pray for a single that had Track of the Week written all over it we'd pray for something like this. Something with a big wooshing chorus and memorable lyrics. Something by a band with the word 'dinosaur' in their name.

And what should land in the inbox for review (look out in the August issue of Artrocker Magazine) but this. 'Lemonade' by Miniature Dinosaurs.

Years ago, when writing for This Is Fake DIY, we were sent a copy of Miniature Dinosaurs debut single '(I Want To Watch) Top Gear'. And although it was a fab paean to staying in (a sort of 21st Century look at what Madness approached on 'My Girl'), we sort of forgot about them a bit. Thankfully this is an incredible way to be reminded, as it's moved their sound on no-end. The four-piece flex their pop muscles nicely on a song that you feel The Killers have been trying to write since they last put out a good record (Sam's Town, 2006 - fact fans).

If you listen to this song once and don't feel the urge to play it again afterwards then you might need to check the place where yr appreciation for pop music used to be.

There's good things happening at KPL Towers right now, and 'Lemonade' is definitely going to be soundtracking them.

Email ThisBlogThis!Share to TwitterShare to FacebookShare to Pinterest
Labels: Miniature Dinosaurs, Track of the Week 2012