Track of the Week: Blur – Under The Westway 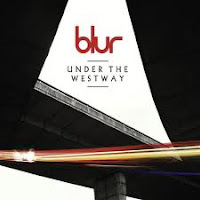 Nothing more than a disgusting decadent farce. Some may say the same about Britpop, but it's the Olympics we speak of. A show for the rich and greedy, extolling the so-called virtues of competition. The slaves performing for their owners. But at least you can watch it on The Official TV of London Twenty-Twelve, whilst eating The Official Cereal Bar of London Twenty-Twelve. If you can afford a cereal bar that is. But worry not, at least the sponsors will do well.

If you want to make a similar argument about Britpop then you'll still find it hard to deny that in Blur something beautiful came out of horrid jingoistic nationalism. Moments like 'Tender', 'The Universal', and the entirety of Modern Life Is Rubbish. Listen now and hear why Blur still matter and why new material is something to get excited about. Because they reached us, not matter how old we were. They've influenced so many of our bands, from Kaiser Chiefs to Paintings of Ships. And they've proved everything good we've ever said about them by repeating their trick.

Out of the pomposity of the Olympics and the strutting of the ruling classes over London in the name of SPORT comes 'Under The Westway'. And it almost seems worth it. Understated and pretty, it's everything the surrounding bullshit isn't. It doesn’t sound like a “song to play at Hyde Park”, but a song to listen to and get wrapped up in. A song that comes into our homes and blocks the world out. It doesn't deserve the comparisons it's getting to The Beatles. It's much better than that, but then Blur always have been.

This may or may not be the one of the last songs we ever hear from the band, but that's irrelevant. England in 'summer' Two-Thousand-and-Twelve is a shit place to be. We're poor and the weather's awful. Popular culture's down the drain and sports are everywhere. Blur have provided a moment in time for us all to retreat to. And we need it more than we ever have.

Email ThisBlogThis!Share to TwitterShare to FacebookShare to Pinterest
Labels: Blur, Track of the Week 2012