Tell Me Something You Do Like: Gunning For Tamar

It's the turn of Alco-Rockers Gunning For Tamar to tell us about something they think is GRATE! 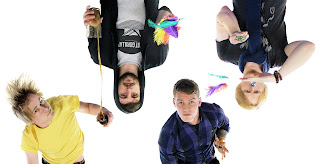 For the latest instalment of our Tell Me Something You Do Like feature we turned to our favourite record label Alcopop! Records. With an excellent and diverse roster of handsome bands we knew that they'd be someone with something absolutely awesome to talk about.

Gunning For Tamar represent the heavier end of the Alcopop! story, a four piece from Oxford their last EP, Time Trophies, was released as a wrist watch and next single 'Dark Sky Tourism' is coming out as an A2 screen print.

You can buy all of this here.

To refresh your memory, here's what we've said of Gunning For Tamar in the past.

“For fans of the label think along the lines of Jumping Ships and LightGuides rather than My First Tooth, for the uninitiated think of crunching, but smart, rock music with brave instrumentation and an emotive bent.”

But don't just take our word, you can listen to 'Astronaut Abort' below, and whilst you are let GFT drummer D'Arcy King tell you exactly why he loves Japanese animation.

Before I begin on this exciting rant that I'm salivating at the mouth about I should, in all fairness proclaim NERD ALERT! This is because I'm going to talk about animation, cartoons in fact, so CHILD ALERT could be shouted too from the tops of ridiculous, metropolitan sky scrapers that kiss the cotton candy clouds that swim through the light blue sky. I'm going to be even more specific and focus on Japanese animation, Manga and Anime.

Before I explain why I think Japanese animation is so god damn awesome I thought I should explain that I'm not talking about your general, mainstream Anime. No I'm not talking about Pokemon or any other children's cartoon that promotes animal cruelty and the pitting of crazy animals against each other to the death (ok so no Pokemon die but it's heavily implied, seriously). If I was into that (which I'm not) I'd go to an illegal cock fight or watch bull fighting. Also, I just think the show is rubbish. YES I watched it a bit when I was a kid (15 years old) and yes I bought the first Pokemon game for the game-boy, I got over it ok! I'm also NOT talking about the tentacle rape porn that so many people jump to when you say “I like Anime and Manga”. That shiz is just wrong, on too many levels it's wrong. Who comes up with that stuff? I bet the guy who wrote 'The Human Centipede' (haven't watched it) loves it. I'm talking about shows like 'Fate Stay Night', 'Elfen Lied', 'Black Cat' and films like the entire Studio Ghibli collection, 'Fist of the North Star', 'The Girl Who Leapt Through Time, 'Summer Wars' and 'Castle of Cagliostro'. I'll put a small list at the end because I'm just that kind of guy.

So what got me into Japanese animation and sparked my love for beautifully drawn artwork and imaginative story lines I hear you say. Well I've never been one to fit in very well (sob story) and I've always preferred the world as I see it in my head than what is actually there. With this said a mate of mine lent me Final Fantasy VII (NERD ALERT) and well.....that is a game and a half. The story line, the sub story lines, the characters, the sub characters and the whole darn game in its entirety is incredible. You mix this in with the imagery and artwork (albeit dated now) you have yourself a dangerous concoction that for me, was more potent than the strongest drug around. It was shortly after that another mate of mine said “if you like that you will love this” and brought round 'Fist of the North Star' and that is just a ridiculous film but ridiculous in a good way. Think post apocalyptic Terminator future but instead of robots just insanely strong, psychotic men with one super strong guy kicking all their asses for being dick heads. I mean, come on! That description alone says it all. The main man cuts a falling skyscraper in half with his own head....HIS OWN BLOODY HEAD! Now don't jump to the conclusion that all Manga and Anime are like 'Fist of the North Star'. That's the beauty of it, there are loads of different genres such as Film Noir, Drama, Romance, Comedy and well you get the gist. I have yet to discover a horror but that's no big issue. Anyway, I was hooked then on and have amassed an impressive library of all kinds of Manga and Anime volumes.

It's hard for me to pinpoint one exact or main reason why I enjoy Japanese animation more than other animated formats (I'm not sure format is the right word but sod it). It is everything about it that suddenly immerses you into the story and I challenge anyone to watch a great Manga/Anime film or series and think it wouldn't be cool to be one of the characters or in that world. The imagery and artwork for one is incredible and there are so many different versions and styles out there and each one has something so unique and mesmerizing about them. The music, especially that which accompanies Studio Ghibli films. It is just beautiful to say the least. Then there are the story lines and I mean really good story lines. Stories about floating castles, poisonous forests reducing the worlds population to near extinction, a world wide international thief saving a princess from an evil baron, a famous pig (yes pig) fighter pilot protecting the Adriatic Sea from sea plane pirates or an invention that brings your dreams to life taking over the world. I mean I could sit here and write a review for each film and series I've seen but you don't have time for that, no one has time for that and you still won't get what I'm on about or really care. So I put this to you, watch one of the Manga/Anime in the list below OR better yet you come over, I'll pop some corn and we can watch one together. Deal?

Email ThisBlogThis!Share to TwitterShare to FacebookShare to Pinterest
Labels: Alcopop Records, Gunning For Tamar, Tell Me Something You Do Like