Track of the Week: Screaming Maldini – Life In Glorious Stereo 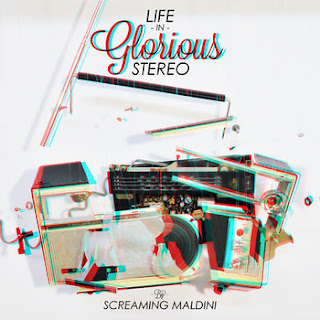 Clear plenty of room in yr pop library; this is a BIG song.

Sheffield progressive pop collective Screaming Maldini have finally unveiled the lead single from their forthcoming self-titled debut album. And if there's ever been a song with as descriptive a title as 'Life In Glorious Stereo' then it has never come our way.

We've heard things described as being 'pocket symphonies' before and would be tempted to talk about this as such, if it wasn't for the fact that we've never had any item of clothing before with pockets big enough to contain this. This song is absolutely HUGE.

Amazingly 'Life in Glorious Stereo' makes The Polyphonic Spree seem toned down in their approach. But where the Spree get their effect from packing in the personnel Maldni manage it as a tight six-piece, bouncing vocal harmonies across the pop chorus, ELO-esque synth bridges and crazy sound effects that all join together for one of the greatest pop hits of 2012.

With both the single and it's b-side 'Minor Alterations' multiple listens aren't just recommended but essential. So much is packed into these two songs, and with such attention to detail, you'll miss plenty on the first few listens. So tuck in and prepare yourself for what's sure to be a stunning album.