For the second instalment in our new feature series Ben, from ace math-popsters Olympians, defends grammar. 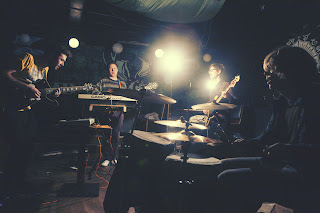 We've featured Olympians a few times on Keep Pop Loud and to give us another excuse to shout about them - this time specifically about the second of their Book Club singles - we got them to tell us about something that they do like.

And to accompany this feature it comes recommended that you wrap your ears around 'The Dictionary' - see it all ties together... sort of -  which is the terrific follow up to 'The Great Gatsby'.

The vocal harmonies take centre stage here whilst musically instruments wrap themselves around each other in swirling waves. It's an intricate little composition and performed with a tenderness where many (supposedly) similar bands prize aloof superiority. Which brings us nicely to grammar - Olympians "something" of choice.

Of course we're joking. They'd never be like that. Read below for a fantastic take on why grammar is such an important tool, but not a weapon. And as a Friday treat here's the video for 'The Dictionary'

GRAMMAR
The possibilities, when faced with the task of talking about something you like, even for a morose tosser like me, are almost endless, but everyone likes sweets and high fives and red trousers, right, so where's the fun in that?  More interesting would be to lean to a subject which has had a bad press or general hate surrounding it, you know, like warmongering or conservative MPs. I don't like either of those obviously but I bloody love grammar (despite all the hate crimes committed in its name). It is sadly often disliked, for two reasons, either by people who don't understand it (which we can ignore because it's a stupid excuse) or because it often comes hand in hand with unwieldy pedantry. For many, grammar is a pointless, outdated set of rules that just make things complicated. Why differentiate between 'fewer' and 'less' when we can just have one word? Having needless rules all over the place just get in the way, right? WRONG. Rules are glorious. Once you learn them you don't have to think any more about whether the things you say make sense and have universality. Our language is exciting because of its eccentricities, they are interesting, purposeful, fragile and beautiful. Creatively, it's much easier to produce things within boundaries or frameworks. If someone says: "Write a concept album", you go: "Erm, that's a bit cheesy isn't it? Sounds like a bit of an undertaking. 'Spose I could give it a go...". If someone says: "Write a concept album about Bruce Springsteen on the moon", you go: "Ha, great! I'll start with the snare! See you in a week!"

There is a somewhat populist view that if enough people do things incorrectly then the definition of what is correct changes - it's just evolution, right? I think this is a little mistaken, and the evolution of language is an incredible and consistently fascinating thing, but generally what's great about it is that it's a reflection of people's ability to streamline, not just indescriminately get things wrong. The great vowel shift, our loss of gender and tense endings which don't depend on the person doing the verbing (in our regular verbs -ed) are great examples of this. I would say that green grocers arbitrarily splashing around apostrophes isn't. Some pedants see this evolution as laziness, but I think it's more efficiency.

Grammar is a great analogy for many things. Its evolution over the years is similar in many ways to human evolution. Our language has qualities and processes which developed because they had to in order to convey ideas clearly and unambiguously, just like opposable thumbs had to develop in order to enable us to open cans of fosters.

Obviously the main reason I like grammar is that as a sports-fearing gangly loser it's one of the few things that I can feel commanding and macho about. Being geeky is very much a form of pompousness. I learnt very slowly as a teenager that people don't respond very favourably to being corrected when they misspeak, but I now realise there are more subversive ways to be a pedant that don't upset people. (I save the sarcastic out-and-out corrections for replying to council letters of complaint now). For instance I like to use the spelling 'program' or the word enormousness or end my sentences in prepositions (if they're verb particles). There. I didn't tell anyone I was doing it, I just did it. I didn't correct anyone. Just said things. And I feel great inside because I won the grammar game a little bit. And if some trumped up arrogant know-it-all quack tells me "ACTUALLY it's spelt programme/enormity is probably the word you're looking for/you can't end sentences like that" then I calmly reply "you know programme is just a made up Frenchified version of the real spelling/enormity is a serious crime not size/prepositional endings were pointlessly banned by over enthusiastic middle age monks trying to impose inappropriate Latin rules on our language to make it more formal. So fuck you!"

And then everyone - people that hate the grammar pedants, and people that love grammar - everyone is happy. Together, embraced in the warm joy of wordly correctitude. Everyone happy. Except the teacher I just corrected who then had me suspended.

Email ThisBlogThis!Share to TwitterShare to FacebookShare to Pinterest
Labels: Barely Regal, Olympians, Tell Me Something You Do Like