Track of the Week: The Darkness – Nothing's Gonna Stop Us 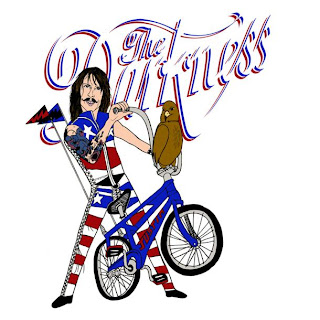 Released: 1st February
Label: Self-Released
Get It: The Darkness Website

They're back, they're amazing and nothing's gonna stop them.

Finally, the return of The Darkness. I've been waiting for this moment since they reunited with original bassist Frankie Poullain. And yes, I know that at their peak The Darkness were the least cool band, with the least credibility in the world, but at the time I was but 16 and not concerned with such things. But then neither am I now. Whilst this should be indiepop-tastic and The Darkness are anything but they are at their core an incredible party band with ace tunes. And if Big Scary Monsters can take Andrew W.K. in then so should you all accept The Darkness.

Luckily their new tune 'Nothing's Gonna Stop Us' is in the spirit of their tremendous debut album Permission To Land, the record that opened up guitar music like no other album before had and one of the best things they've ever done. It's certainly better than anything from the under-rated One Way Ticket To Hell... And Back and could well be one of the best tracks of 2012.

With the lyrics about cycling around Lowestoft at night with a friend on yr pegs it's not going to give anyone any epiphanies regarding the human condition. But last time I checked neither do The Horrors, and this is certainly more fun. With life as it is right now there's not much to cheer us up. Most Pitchfork music is content to wallow in it's own sense of achievement this is the shot in the arm that punk was to the late '70s but without the pretence of claiming to change the world. It will however make you feel like you can.

Like 'I Can Do That' by The Futureheads, this is a song that can make you get off yr ass and really do something with yrself. It's better than any other big cock rock anthem, but at two and a half minutes long you could argue it's a bit short. Still, it's easy enough to press play as soon as it's finished or, like I did, set the iPod to repeat and let it play endlessly.

On the NME comments section 'Nothing's Gonna Stop Us' has drawn comparisons to Art Brut, and although it has their bounce (and an animated video you could imagine visualising one of their earlier singles) this would sit comfortably at home on Generation Terrorists with it's nimble, glam guitar work and driven rhythm section. Still either way, when a song gives you as much vitality as this what can you call it other than vital?

Email ThisBlogThis!Share to TwitterShare to FacebookShare to Pinterest
Labels: The Darkness, Track of the Week 2012