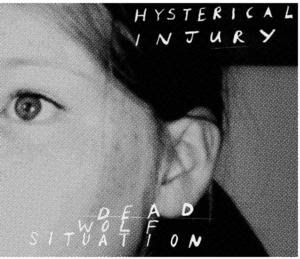 Hysterical Injury are a brother/sister duo (originally from Wales, but based in Bath & Bristol) that make a DIY rock racket that to start with you could assume sits nicely in the DFA 1979 mould. Bassist/vocalist/sister Annie takes lead from the off with a scuzzy bass riff and a menacingly cool vocal.

This is just 'Halo Alkanes' though, the opening number from Dead Wolf Situation, Hysterical Injury's debut album. And mid-way through this track Annie's bass and Tom's rolling drums are joined by some scratchy guitar resulting in a 90's alt. rock feel. With “ooh's” and “aahs” Annie's vocal is like a grungey Justine Frischmann. And whilst the band never feel as though they're imitating anyone there's multiple points across the record where elements of their sound can be likened to the unlikeliest of sources.

The poppier 'Icebreak's extended instrumental passages occasionally bring to mind mid-00s pop-punks The Automatic thanks to the post-hardcore influenced bass playing and Annie's sneer on 'Cycle One' dips into punk posturing such as that from John Lydon in his PiL days. These sections are always well integrated into the overall Hysterical Injury sound though. Across the fifty minutes their nuances become familiar and a concrete identity is crafted.

Riffy conclusions that utilise Annie's meaty bass riffs and Tom's powerful drumming become the norm and ensure that even moments you initially conceive as missteps evolve into something better. With 'Skyline Interference' Following on from the creepy 'Into The Cabin', which settles into a tense groove and showcases why the band describe their songs as being about “sex, rebellion and claustrophobia.” you worry that they're attempting to repeat the same trick right away. Luckily the song title isn't wasted and the band loosen up, bringing Death From Above again to mind.

Above all however those that stand out as highlights on Dead Wolf Situation are 'Rosetta's Waves' (droney, with a dream-pop floaty-ness to the vocal), 'The Works' (loud-quiet and punky) and 'Vision Of Trees'. It's the last of these that's probably most deserving of mention, recalling as it does the Victorian English Gentlemens Club. With an a'capella intro yr gradually lulled into the song that builds itself up very carefully before coming together for a meaty conclusion.

In all Hysterical Injury may prove to dwell in the dark too much for some, but there's some excellent moments on Dead Wolf Situation that make the band worth investigating.

I have just downloaded iStripper, so I can watch the sexiest virtual strippers on my desktop.