It goes without saying that all 'End of Year' lists are a) subjective b) published too early. And none more so than this one.

These five gigs are merely the five from this year that stand out the most in my mind. It is of course only personal opinion and my memory is not perfect. There's still gigs to come, and I've not been to every event this year. (Obviously)


-----
#5 Art Brut, The Plug, Sheffield (Thursday 6th October)
There's no reason why being solid and reliable should mean that bands fall off of these lists. Art Brut are always amazing live, and even if the crowd was smaller and less jumpy than in the past the set-list and Eddie's on stage banter speaks for itself. Four classic albums and Art Brut are a proper indiepop institution.
Read the KPL Review


-----
#4 Best Coast, The Queen's Social Club, Sheffield (Thursday 28th April)
Although Mazes and Spectrals supplied VERY strong support, it was Best Coast and Bethany in particular that dazzled the old working mens' club. They played so many songs and all of them were great. The sort of gig that moves a band up from a 'like' to a 'love'.
Read the KPL Review


-----
#3 Alcopopalooza III, The Windmill, Brixton (Saturday 09th July)
A celebration of all things Alcopop!. I may have primarily travelled down to London to watch the AMAZING Johnny Foreigner, but it was Katie Malco who left the most impact. Unforgettable even before we mention The Attika State, Jumping Ships, Delta/Alaska, LightGuides and My First Tooth. Phew!
Read the KPL Reviews: Part 1, Part 2


-----
#2 Tramlines Festival, Sheffield (Thursday 21st – Sunday 24th July)
Ash having support from The Futureheads, Johnny Foreigner and The Crookes. Los Campesinos! headlining above Dananananaykroyd. Guillemots playing at the Leadmill. It was as if the Sheffield festival was catered to Keep Pop Loud. With local stars Standard Fare, Screaming Maldini, Kate Jackson and Nat Johnson also making appearances Tramlines stamped it's undeniable mark on 2011. And it was ALL FREE.
Read the KPL Reviews: Part 1, Part 2, Part 3


-----
#1 The Darkness, Sheffield Academy (Monday 21st November)
Despite The Darkness being, in many ways, everything that I should abhor they were one of the formative musical experiences of my youth. Their live set this time around was flawless and so much fun to watch. Other gigs may have had more great acts, but nothing else this year had The Darkness, and that counts for a lot.
Read the KPL Review 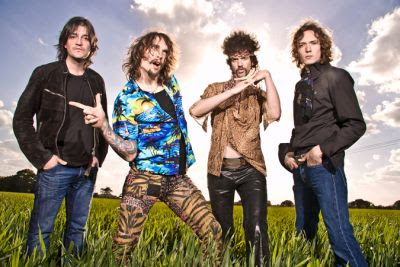