Album Review: Emmy The Great & Tim Wheeler – This Is Christmas 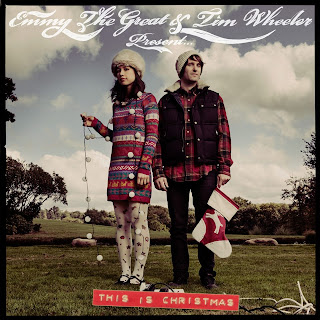 
It's clear that right from the stringed intro through to the acoustic closer 'See You Next Year' that the sonic template of This Is Christmas is set for the heart of the festive. But despite songs about marshmallows, snow and Zombies it's never naff, never cloying and full of genuine sentiment.

Take 'Home For The Holidays' for example, a track that I've already highlighted as being a standout of not only the album, but the sub-genre of festive pop songs. The heartache and melancholy that comes through is far more festive than anything that's heard on radios over December, and a key reason why someone such as myself who's fairly anti-Christmas has taken this album so close to my heart. It's not the only such moment either; Emmy takes charge on both 'Christmas Moon' and '(Don't Call Me) Mrs Christmas' which reference and expand upon the same retro styling that competitors She & Him specialise in.

The latter of these two particularly is worthy of mention, telling the tale of Santa's wife being left cold and alone in the ice at Christmas whilst her husband spreads joy to all of the other's in the world. One for anyone who feels abandoned this winter. It's not all sweeping melancholy, though. Not with Tim Wheeler on board. He brings the massive pop sensibility of Ash in for anti-festive treats 'Christmas Day (I Wish I Was Surfing)' and 'Zombie Christmas'.

'...Wish I Was Surfing' combines Tim's surf guitars with sleigh bells for a song about escaping somewhere warm, and simultaneously keeps with his tradition of having one song about surfing on each album. 'Zombie Christmas' on the other hand tells of the dead rising over some gonzo pop-punk with a wobbly Peter Hook-esque bassline. No matter how good festive music gets it's going to take something rather special to make a better lyric than “Well, I don't wanna have my last Noël / We're gonna kick those zombies back to hell!”.

Yes it's silly, but so is the whole concept of Christmas. Some might argue that nonsensical 'Jesus The Reindeer' is one step too far, whilst others may say that it's a commentary on the appropriation of the meaning of the season. I just reckon it's a great pop song.

Despite Emmy being an arguably more 'current' artist and the higher profile that Tim has enjoyed over the years, neither one dominates on the album. They receive roughly equal time and both get solo numbers, lead vocals and some time on backing. For Ash fans who needed further persuading This Is Christmas is a further demonstration of why Emmy deserves further investigation. It's a true collaboration and has done wonders already to boost the profiles of both involved. If Ash decide to go back to releasing studio albums, and they're as good as this album then we'll be in for a real treat.

I'm just disappointed that I'm going to find it hard to listen to such a good album in 11 months of the year.