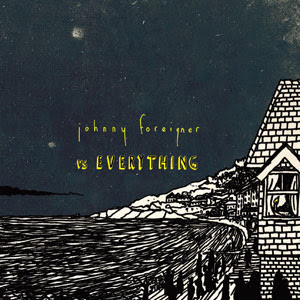 It's difficult to heap too much praise on Johnny Foreigner... or any of the bands in the pop underground. Over-analysis of what they say and mean or in depth dissection of their musical chops will just lead us down the über-serious road that far too many pop writers at institutions such as NME and Pitchfork try and take. And if there's something that we've learned this week it's that we're not like the NME. Their petty vindictiveness shown in this review draws a clear line in the sand.

All of that said, Johnny Foreigner Vs Everything is as close as I feel that it's possible to get to the perfect DIY pop album. It's the sound of a band utilising everything that they've learned. It's determined and honest. It has real depth and variety whilst maintaining focus and it hangs together as a complete piece of work. It's also got some of their best songs yet.

With 'What Drummers Get' and a new recording of 'Johnny Foreigner Vs You' making return appearances from the Certain Songs Are Cursed Frisbee EP, Johnny Foreigner's 2011 campaign is nicely tied together whilst ensuring yr not going into a 17 track 'Musical Catastrophe in Three Parts' completely cold. Not that you particularly need this entry point, two interludes of musique concrète break up the running and add further to the sonic variety. The spoken word samples follow on again from the 'cursed songs' theme of the previous EP and are well chosen, although with their emotional openness potentially uncomfortable for those unaccustomed to the concept.

With no moments of filler it's hard to pick out highlights. Even 'With Who, Who And What I've Got' (a live highlight that many have been waiting for a long time to hear the “Standard Rock” recording of) doesn't overshadow tracks such as 'Doesn't Believe In Angels' or opener 'If I'm The Most Famous Boy You've Fucked, Then Honey, Yr In Trouble. But if my arm is twisted then I'd have to single out the left-field pop of '200X', epic communal sing-along 'New Street, You Can Take It' and single '(Don't) Show Us Yr Fangs' as personal favourites. At the moment.

But it's worth saying that I've only been living with this album for a short while. The closing pair of 'The Swell/Like Neverwhere' and 'Alternate Timelines Piling Up' are much more subtle and honed than anything we've heard on Johnny Foreigner's previous two albums with the latter disappearing in a patter of drum machine at close. This feels like a wind-down after the hearts-on-sleeve intensity of the rest of the record, but perhaps in time and with a focus on the album sections individually these moments will come to have their own impact.

Conversely, maybe the opposite will be true and the impact this album has will dull over time. Perhaps to get the most from Johnny Foreigner Vs Everything you need yr life to be that bit screwed up so that you need pop music to fulfil an emotional need. (Maybe this is more opinion piece than it is review.) But right now as 2011 starts to draw to a close this is the Album Of The Year.

Because of their excellent lyrics, because it feels like we're in this mess together but, most of all, because as long as there's Johnny Foreigner there is hope... and that's not something anyone's ever said about the NME's continued existance.