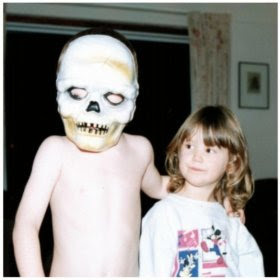 It's clear from what's been written on Keep Pop Loud over the past few months that I'm fairly smitten with the excellent acoustic pop of Katie Malco. From her captivating performance on the Alcopopalooza patio through to the recent split threEPeople release, she's been an artist that has been worth keeping a close eye on. Now she's released her first full EP for Alcopop! Records, encapsulating everything nice that's been said about her.

With a band fleshing out her creations, Katie Malco & The Slow Parade is the sort of record that is only ever made by an artist that's a complete one-off. Being a young lady with an acoustic there's been comparisons to Laura Marling that here simply don't ring true (especially if we're talking Marling's most recent releases). Monkey Swallows The Universe are a closer act, but still don't sound all that much like Malco. Whilst her voice doesn't discernibly have anything 'other' about it she doesn't sound like anyone else. Musically there's moments that recall fellow PoPsters My First Tooth, but again it's not the full story.

You'll know 'Johnny' by now. It's the lead track that's been up for streaming for the past week or so. And depending on how closely you've been reading KPL you might have glimpsed 'Florence Nightingale's House', a Track of the Week that I was raving about post-Alcopopalooza. Likewise if you've been subscribing to Big Scary Monsters '11 Collection you'd have heard 'Get In The Car'. In this respect coming to this EP is like coming to the debut album of a band that you've been following from the singles. These existing tracks still sound great, but it's the collection together with the new ones that really confirms what you've been thinking all along.

The best of these newbies here is, for my money, 'Sad Eyes'. It's the poppiest of the bunch, with the most going off musically, but still it's Katie's voice that really carries it and transports the listener into the song. With a mega-catchy chorus it's easy to just sing along if you don't want to think and just get carried away. It's like it's being beamed in from a place where everything's not totally fucked, and just for four minutes it takes you there too. A brilliant song.

But that's just a personal favourite. Each of these five is going to stand above the rest in the ears of a listener, and deservedly so. This EP is a wonderful and unique little musical artefact that is hopefully only the start of a fruitful career for Katie Malco. How Alcopop! finds so many artists of such a high quality I really don't know, but I'm bloody glad he does.