Well, it's been a while since I posted at any length about what Keep Pop Loud Records is up to right now. So sorry if it seems like things are a bit quiet. Thankfully there's quite a bit of great news that you may well have seen if you're following either the Twitter or Facebook feeds. There's also plans afoot for the next stage in KPL Records existence... but I can't tell you about that just yet.

Firstly the Keep Pop Loud CD is selling pretty well (so if you've not got your copy yet then you might want to now) and has recieved a pretty big boost by getting reviewed in the current (Nov 2011) issue of Artrocker Magazine. As well as sitting in between the reviews of the latest Coldplay and Florence + The Machine releases they only went and gave the CD 5 STARS! That's full marks. Obviously I knew it was that good - as do those of you who've already got your copies - but the fact that such a major publication thinks that we're heading in the right direction has been a massive morale boost.

If you're interested you can read the review right here: 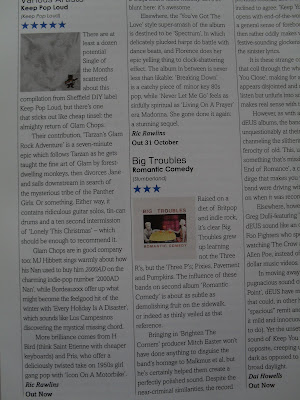 The other big piece of Keep Pop Loud Records news that you might have missed is the interview that I did with Katie from Better Weather in Britain. As a fellow Sheffield citizen it was really great to meet with Katie and discuss all kinds of pop stuff. The interview is available to listen to at that aforementioned link with the show being a special dedicated to all things KPL. You can hear some of the tunes from the CD and get to listen to me talk about the inspiration behind what we're doing. So listen to it now and follow Better Weather on Facebook to keep abreast of what's going to be featured in future shows. GREAT STUFF!

As well as Better Weather in Britain on Tranquilizer Records Radio Katie is also responsible for putting on ace pop shows in Sheffield. And coming up at Christmas is something rather special which all Keep Pop Loud fans and friends should come to.

The 5 Bands of Christmas will be at West Street Live on December 20th and is headlined by none other than Keep Pop Loud CD stars Bordeauxxx. This is sure to be a FAB night and as it's free entry there's no excuse! Travel from far and wide and we'll drink to a poptastic year!

Oh, also if you check out this interviews tag you can get an insight into some of the bands on the CD. There's chats with Bordeuxxx, The Half Rabbits, Pris and Aug Stone from H Bird.
Posted by Lee at 06:00

I hope a bunch of people come put to the show. It'll be aceballtastic!