For the first in a series of quick chats with bands from the Keep Pop Loud Compilation we sent a few quick questions over to the very excellent Kidnapper Bell.

So, without any further waffle from me, Keith from the band talks about the past, the future and 'Everything Ever'

To start with, can you introduce the band for anyone who might not know?
Hi, we're Kidnapper Bell, Liam plays guitar and keys, Jenny plays bass and sings and I'm Keith and I sing and sometimes play guitar when Liam shows me the chords to play. Liam and Jenny are from Black Heath and I'm from Washington, DC but Bearwood is home now.

So, you're recording at the moment. Is it going well?
The going is good and we've got about 4 or 5 songs ready to almost go for a possible EP. When our drummer went we thought it might be difficult as far as writing goes but, and it might sound cliched, it's never been more fun and creative even though the sounds might be slightly different to what we've done before.

You said that you're going in a new direction with the material. Can you give us any indication of which form this new direction is taking?
Well for now since we're programming the beats it feels a bit more structured but we're trying out a new drummer soon so I'm excited to see what happens when we get this 20 something who looks 13 in to add live drums. I've never been very good at comparing our songs to other bands and genres though but hopefully we'll send you something soon and get your thoughts on where it all fits in, which would be helpful :) Liam's still got his array of pedals though and I'm still stuck in turn of the century college rock so we'll see!

With this potentially coming under a new name, could we be seeing the conclusion of Kidnapper Bell?
It's looking more likely just because with losing our drummer and finding out that the 3 of us are feeling all refreshed and stuff we keep thinking it would be a good idea to have a new name for a fresh start. Saying that, when we start playing live again we'll probably still play some of the old Kidnapper Bell songs as well. Contradictions ahoy.

Are you going to be self-releasing again? And how has self-releasing worked for the band in the past?
Not totally certain how the next one will be released. We self-released our first EP and then did the mini-album and the last AA single through Stressed Sumo in Derby, but through both types of releases we've been very involved in trying to sneak into the ears of people and in getting shows. Along the way we've met a load of great people from both bands and independent promoters who do it because they love it, even when success means just enough money to get the next gig on.

It's 'Everything Ever' that's on the Keep Pop Loud compilation. What can you tell us about it that we might not know?
It was produced by Tom Woodhead from ¡Forward, Russia! who heard one of our old songs, "The Great Outdoors" on the radio and contacted us about mixing a future song and "Everything Ever" ended up being that song. All I had at first lyric wise was the phrase "Everything Ever" which I wrote down on a petrol receipt while I was listening to the song "Unsatisfied" by The Replacements, and in particular the line "Every thing I've ever wanted, tell me what's wrong". Then I just kind of went off from there and well, I don't want to tip the cards too much in case I go "the song is about this", and then someone who might like it and has drawn their own meaning goes "well that's ruined it, thank you very little".

Kidnapper Bell - Everything Ever by kidnapperbell

How come you'd not released 'Everything Ever' before? It sounds like prime single material to me.
Mainly cause there were not enough songs recorded at the time it was mixed to put out an EP or an album. So there it sat, all alone, while many months later "Mouthful of Pennies" and "Falling and Laughing" ended up getting released together with "Everything Ever" being the odd one out. So it's really cool to see a song that some people have said they really liked getting a release on the KPL comp.

For a city of it's size we don't see many bands coming out of Birmingham. Why is that?
I guess living in Birmingham I see loads of bands around but not sure why more don't break out of the city. Even though I've lived here for 6 years I still feel like a tourist sometimes.

And are there some groups around your area that you can strongly recommend?
Off the top of my head and of the ones that are still going as far as I know I'd say Pandas and People, Ace Bushy Striptease, Falling and Laughing, Calories and of course Johnny Foreigner who's new single is really good and the A side reminds me of The Anniversary, who are one of my all time favorites.

Who's your favourite pop star?
I'll say Travis Shettel cause Piebald is one of those bands that I can go back to again and again and they will still have the same effect on me that they did when I first heard them. My old man rocking chair soundtrack will be Piebald.

When do you think we'll be hearing the results of your current recording sessions? You've got a pretty dedicated fan base out there that seem pretty eager
We hope to start recording in November so should have something in the not too distant future. Hopefully we'll get to playing live again as well. As for the people who like us, we love them more than they'd care to know and we hope they stick around for what comes next!

Thanks and good luck with recording.
Cheers!
---- 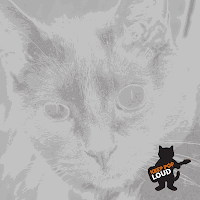 The Keep Pop Loud Compilation is available to order now from the store. As well as Kidnapper Bell it features exclusive songs from MJ Hibbett, Screaming Maldini and Eddie Argos (from Art Brut)'s Glam Chops alongside ace stuff from The Winter Olympics, Pris and Dogs Die In Hot Cars.

There's only 100 made, so to avoid disappointment, you'd better order now!

Brilliant. The amazing Kidnapper Bell (in whatever form they decide to take, under whichever name they pick) will, without a doubt, continue to bang out some of the best music ever and be my favourite humans. Thanks for this, KPL! Really great read and, as my mobile just got put through the washing machine, it saved what could have otherwise been a horrible day!

Hear hear - what Katie said! Falling and Laughing and Mouthful of Pennies in particular are amazingly excellent pop songs. Can't wait to hear new stuff from this great band and see them live again! It's been too long!

I have just downloaded iStripper, and now I enjoy having the sexiest virtual strippers on my desktop.