Review: An Introduction To The Scaramanga Six 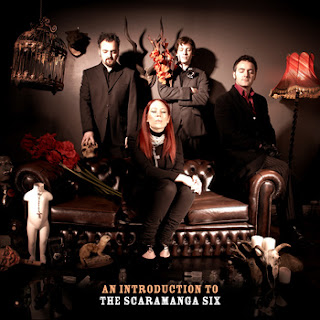 I'm perhaps a bit slow off the mark on this one, but for those of you who've not seen it yet, The Scaramanga Six have compiled an introductory compilation that you can download from their Bandcamp page.

Covering their six album/15 year career, the imaginatively titled An Introduction To The Scaramanga Six is available for as much or as little as you want as a download. Although be warned, across the sixteen songs you will find something that you'll want to investigate more. For me the 'introduction' has encouraged me to delve deeper into those albums of theirs I already own (Strike! Up The Band, The Dance Of Death, Songs of Prey), cutting up their discography and serving as a promt reminder of why I took to them in the first place.

As such 'Baggage' is an excellent opener to the compilation and a taster of what to expect. Mixing the absurd with the creepy, it is flamboyant and eccentric with theatrical piano, cinematic violins and chugging guitars. As always the production is pretty clean and the choruses huge. The feeling persists from here-on-in that there's really nothing other than The Scaramanga Six's hardcore independent ideals (and perhaps a prudish music press) that's stopped them form breaking through to the big time.

When we bear in mind that they begun in Huddersfield the height of Britpop and have survived everything from the 'New Rock Revolution' to 'Nu-Rave 'and right through the 'New Yorkshire Scene' (why did everything have to be 'New' in the 00's, fuck me) it's great to see that they've refused to comprise one iota on their mission and are still as unfashionably cool as ever. But like I said, it's not something that should get in the way of them getting much more attention.

On 'You Should Have Killed Me When You Had The Chance' and 'I Didn't Get Where I Am Today' (both from Songs Of Prey) The Scaramagas come across as Yorkshire's answer to Queens Of The Stone Age. Of course they're not as po-faced as Josh Homme's lot, but could just as easily out riff them. Like QOTSA these guitar parts get ingrained easily in to your consciousness. If they were more commercially successful you'd happily call them iconic.

There is more to the Six than just riffs and rock though. The aforementioned theatrics lend themselves well to any genre or style that the band chose to tackle. Whether they're playing at fairly straight indie rock ('Misadventure') or channelling an undead Supergrass ('Soul Destroyer') it's held together by the vocals and guitars of the Morricone brothers who form the core of the rotating line-up. The same goes for the moments when they take on breakneck punk ('Pressure Cage'), epic pop balladry ('Singer Of Songs'), warped Bond themes ('Horrible Face') or steampunk informed gothic pop ('Choking')... which admittedly all sounds pretty disparate, but works wonderfully on record.

When they're described on their bandcamp as “one of the most creative and prolific underground rock bands of the decade” it's not an exaggeration. Not in the slightest. Really, I've only just scratched the surface in selecting moments from this career condensing compilation. In short, if you're at all interested in excellent underground British rock, get yourself over there now and get introduced to The Scaramanga Six. You won't look back.