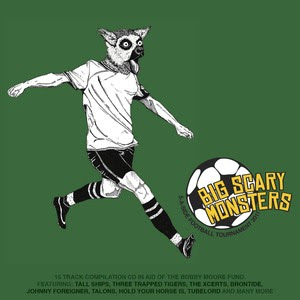 This year's BSM 5-a-side tournament may have been and gone, but thanks to the magic of Royal Mail it's only now that I've got my CD.

Running alongside the tournament as a way to raise money for the Bobby More Fund that raises cash to research into bowel cancer, the CD documents not only those currently signed to Big Scary Monsters, but also some of the other excellent groups that form a part of that same underground scene. Like Alcopop!'s We Grew Up On A Diet Of Jurassic Park And Sensible Soccer, the 5-a-side CD represents the highlights of a scene that's currently at its best. With distinctive and inventive acts showcasing their material it's basically a must own for anyone interested in the British rock underground.

Some of the songs on here I've talked about already. Delta/Alaska's 'D.L.O.I' previously appeared on the Hello Pink Mist compilation (alongside the also present 'A Punch To The Temple' by †Hymns†), and with familiarity has become even better. A very fine example of forward thinking alt rock. Instrumental rockers Brontide and their track 'Jura' meanwhile appeared on the BSM '11 Collection and is highly recommended.

The wealth of familiar names doesn't end there though. Stagecoach contribute what sounds very much like a re-recorded (or re-jigged) version of 'Ice Age', Johnny Foreigner turn up with former b-side 'I Heard, He Ties Up Cats' that includes a star turn from Kelly on joint lead vocals. With Alcopopalloza still ringing in my heart if not my ears, it's great to get another prompt in the direction of Shoes And Socks Off. His semi-acoustic number 'Made' stands out from many off the fuller-on tracks on the CD and ensures the compilation has a full range and depth.

Likewise, it's not all guitars and grunged noise. Although granted, that does form a large part of the BSM Sound, which this compilation helps to promote. No, Tall Ships (who are utterly exquisite by the way) contribute the dynamic and layered keyboard beauty 'Ode To Ancestors' from their There Is Nothing Here But Chemistry EP whilst proceedings are closed by Mimas, with some post-everything piano pop that is wonderfully fragile and tender. In fact 'Relationship', which plays on the nautical nature of the latter section of it's title, really cuts to the core delivering an emotional blow that's allowed to hit home by the spacious arrangement.

So, who else is great then? Well Rosa Valle definitely win 'best song title' for 'Needless To Say Nothing Really Mattress (I'm Declaring Judy A Nemesis)' and Talons, as always, kick more ass with violins than most acts do with guitars. Hold Your Horse Is are also forcing their way into my affections the more I hear from them. It's that combination of directly riffing guitars and actual songs that I'll always have time for. Massively looking forward to that forthcoming album. And as much as it'll now just seem like I'm throwing names at you, big thumbs up to The Xcerts. With b-side 'I Am Home' it's more than evident why they've got a hugely devoted fanbase. I'm sure you'll be able to count me fully in that before long.

For balance, and because some people seem to think I'm too positive on here, we'll conclude on a different note. I don't think I get Three Trapped Tigers. Sure, when listening it's all rather decent, but otherwise I'm not sure it clicks. I'm aware that there's some people who totally swear by them but (and perhaps it's because I'm not heavily into instrumental stuff) it seems a bit too serious for my liking. Plus people confuse them with Tall Ships too often.

But, yeah. As a compilation it works on every level. It's going to push me towards more bands that I was only vaguely into and it's given me some rarities by some old favourites whilst ensuring that cash is going to a much under-publicised good cause. Personally, I'm unemployed right now and am enjoying nothing more than slouching around listening to this CD on my headphones. I feel like a teenager again in all of the good ways.