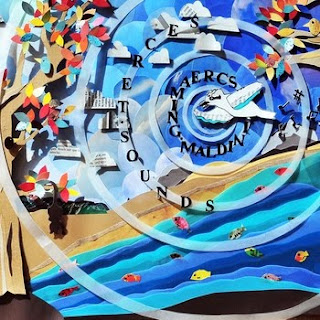 It may seem impossible for me to give Screaming Maldini a fair review. With a brand new track of theirs appearing on the forthcoming Keep Pop Loud Records compilation CD you may think my opinion biased. Well, be that as it may, and regardless as to if you pick up the KPL compilation or not, you still need Screaming Maldini in yr life and record collection. And Secret Sounds is a fantastic place to start.

Comprising of a song from each of their Alcopop! released EPs and two new recordings, Secret Sounds is the release that's helping to launch Screaming Maldini over the Channel. French label HipHipHip has picked them up over there and Secret Sounds is the first EP the Sheffield group are releasing with them. Short and sweet, it's a crash course in Screaming Maldini's all-encompassing pop sound and will carve a space in the hearts of anyone who enjoys pop.

'Secret Sounds' first saw life on the And The Kookaburra EP and is arguably the bands signature tune. Bonkers vocal harmonies help the song to feel like a pop classic the instant it starts up. Whatever way you look at it, coming from an indiepop standpoint or the appreciation of originality, there's a spark present that only comes around when you hear a tune that's been created by a band or an individual of remarkable talent. A talent that's even more obvious when breaking the music down into it's component instruments.

Vocally, and especially on the backing, the voices are so controlled that you'll wonder how it's done. Vocalist/keyboard player Gina is a singing coach by trade and her stunning voice is really integral to the Maldini sound. The drums too, an instrument far too often under-appreciated, shine on Maldini releases and Secret Sounds in particular. Their drumming champ (who also plays in Renegade Brass Band, or so I'm informed) is remarkably good at what he does, hammering out quick and intricate patterns that never overtake the floating melodies but yet ensure that the drums act as an instrument in their own right.

Their use of a full-time trumpet player in the group to create a party atmosphere is also key in helping Maldini rise to the top of the pop pile. It's long been a maligned instrument in the indiepop realm thanks to misuse in naffer music, but here fleshes out the arrangements and adds to the feel of a everyone's-invited street party. ACE! You could almost call them a pocked Polyphonic Spree if you were that way inclined.

Nowhere do all of these elements come together better than on newbie 'The Silver Mountain'. It's epic, summery and seems to offer up a summer sky of limitless possibilities. That it rubs up against the wintery 'Restless Hearts And Silent Pioneers' (taken from the EP of the same name) serves to highlight the feel of sunshine. On the latter, the skittering beat is complimented by strings, tinkling percussion and choir-like backing vocals to paint a perfect sonic portrait of Sheffield at Christmas time. It's as romantic as we'd all like winter to be, uncovering those little details about wrapping up warm and coming into yr bright warm house from the cold. In a word, magical.

Again, the final track on the EP skips seasons yet again. 'The First Raindrop' takes us to a barbecue on an “unesasonably warm Sunday afternoon in Spring”. Like 'Restless Hearts' it's the little details and flourishes, both lyrical and musical that fill out the corners of the song. From the strummed ukulele in the background to “trying to figure out how rain could fall from a blue sky” it's the perfect little portrait of one of the small moments of contentment that makes life worth living.

But what's more, rather than just soundtracking or describing those moments, just listening to the music of Screaming Maldini helps to create them. It's the sound of pockets of uplift in dull days and sonic heavens in the hustle and bustle and does so with incredible talent that's never cloying. As a taster for an album, or an introduction to Screaming Maldni's world it's very very special.
Posted by Lee at 07:45