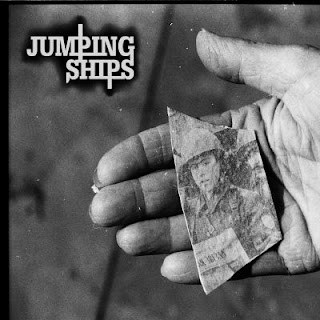 What more is there to say about Jumping Ships? Since they first grabbed my attention with 'The Whole Truth' they've simply refused to let go of it. Their Alcopopalooza set was triumphant and single 'Heart And Hope' got me more than a little bit excited. So after all of that it'd be a bit gutting if new EP Standard Bearer was disappointing wouldn't it?

Well, you'll never have guessed it, but it's ruddy great. A real step up from Orientation and the point from which their star will rise and rise. And for good measure 'Heart And Hope' crops up again, making sure that everyone recognises it as being one of the best singles of 2011. It shows that how no matter how familiar one gets with their material it just doesn't get tired.

As a step up there's evidence on Standard Bearer of more influences and a broader pallet. Where Jumping Ships have claimed that punk and post-rock are key touchstones to what they're trying to achieve, it's been the former that's been the more audible in the past. However, across the instrumental passages of songs such as 'Broken English' it's the latter that's really noticeable. Whilst the quiet bits are quiet and the loud bits are chuffing loud there's an intricacy that weaves throughout, with the guitars sounding particularly fiddly. But in keeping with the punk ethos this isn't wankey or self-congratulatory guitar work, it's tight concise and kept strictly within the bounds of songcraft.

And it'd be remiss to have a review of Jumping Ships without commenting on the fact they write great songs. Properly big anthemic stuff it is too. It doesn't take a stretch of the imagination to see the band getting picked up for some massive support slots pretty sharpish, and once that happens, when the venue is big enough to suit the sounds of the songs Jumping Ships are going to start getting big. At least that's the hope.

Any set opening with something such as EP starter 'Movers And Shakers' is bound to attract attention from any self-respecting rock fan. But better still is 'Bygones'. Starting with the noisy and hard, before letting the quieter moments take charge for the pre-chorus, it feels as playful as it is intense. If there's one criticism, it's a minor one, and it's that the lyrical subject matter is somewhat conventional. But hey, howling yr heart out over relationships gone awry and life slipping out from underneath you is pretty necessary sometimes.

And whilst each song on Standard Bearer certainly deserves it's place (at just over 23 minutes it's basically the perfect length to just play repeatedly, without breaks) it's moments such as that on 'Talisman' that really stand out as worthy of mention. The heavily effected guitars give an extra uplift in place of the chiming guitars. It's this electronic-sounding element that roots Jumping Ships thoroughly in the present, fleshes out the sound and allows the listener to place it in their surroundings. It's a deft touch and makes the song in particular (and EP in general) that bit extra special.

As well as adding to the already impressive Alcopop! Records catalogue Standard Bearer shows that Jumping Ships are really making themselves available for consumption outside of the DIY pop sphere. It's an arsenal of songs they now have in their repertoire, it seems unlikely they'll be stopped.