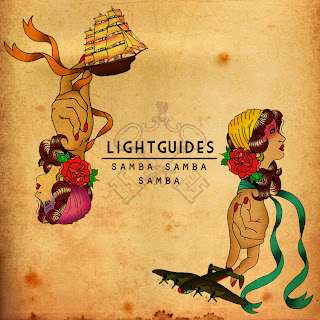 As the least pop-flavoured band to be signed to Alcopop! Records, LightGuides perhaps haven't had as much coverage on Keep Pop Loud as tour buddies Jumping Ships or label mates Screaming Maldini and Stagecoach. But that's not to say they've nothing to tickle your pop buds with. Mini-album Samba Samba Samba is the first release by the Glasgow three-pice on Alcopop! and is definitely worth your attention.

At just under 28 minutes and with seven tracks, Samba Samba Samba is only just short of being a full album in length, but crucially it feels as though not adding any more is the right move. By only releasing what makes sense, the underground rock/pop scene in the UK has made something of a trademark of not being constrained by the traditional album (and supporting singles) release schedule. With bands and labels working together for creative purposes there's no filler on board to help make an extra couple of quid and this benefits releases like this, where it's the best of the bands that are put on show.

Each of these seven tracks on LightGuides debut has a distinct identity and there's not one moment of filler. For an album this is one of the tightest releases of the year and as a min-album it has to be the most epic.

So what do LightGuides sound like then? Well, by virtue of them not having a bass player (it's two guitarists and a drummer for them) there's something in there of Yeah Yeah Yeah's early material, meanwhile the effects on the guitars aren't a million miles away from Jumping Ships heavier moments. But the main comparison that people are bound to draw is to mega-stars Biffy Clyro. Like Biffy LightGuides excel at big and intricate anthemic rock, but it's in having a singer with a thickly Scottish accent the weight of the similarities land.

For an example of the big anthems that LightGuides are capable of check out 'The Arts Factory'. A huge spiralling number where the lead guitars runs rings around it's rhythm counterpart whilst the latter sticks to the drums providing a hard hitting backing. Come climax it's a classic case of arena sized headphone music. You know that these guys have the potential to be really big, but sort of want to keep them to yrself to make it just that more special.

One thing that's worth bearing in mind, is that Samba Samba Samba is a grower. Espcially, if like me you've lived most of yr music life in the indiepop world. First few listens saw former free download 'Old Bucket Seats' stick out as highlight through both familiarity and by being the closest to indie rock that LightGuides get. In the long run though it's closer 'W.H.Y.L.' that's the favourite. Building from the gently played electric guitars through hard rocking passages and vocals that yell “This is the sound of our battle cry!”. It's progressive in structure and with plenty of kick. Lyrics such as “so pack your bows and arrows” demonstrate the imagery that I'm a massive sucker for, whilst the guitars on the outro take some beating.

But there's more; whether it's the gritty emo moment 'Colonel Crookshanks' with noisy jagged riffs, or 'Bachelor Death Party' which uses the old pop-punk trick of having the intro sound as though it's coming from a FM radio before taking a turn into Ikara Colt style artrock there's something on Samba Samba Samba that will grab yr attention. Whether yr ears are open enough to let a big sounding rock band into your life is yr business, but I suggest that if they're not then it's you that's missing out.

LightGuides are one of my favourite bands and I have been a huge fan since pretty early on so I am probably slightly biased. I'm glad you like the album cos I think it is GREAT!