Thankfully waking up Sunday morning was easier than I might have expected. Having not drunk the previous day and ending it at a quiet acoustic gig from Nat Johnson in the Cathedral, I felt pretty fresh and ready for an in the early afternoon wonder down to Tramlines main stage with Mrs KPL in tow.

Aiming to see The Crookes, we arrived a little earlier than expected, catching the last half of Dead Sons set. Having supported Arctic Monkeys at a couple of events they certainly knew their target audience well. Thankfully instead of being complete dullards like Milburn or Little Man Tate, Dead Sons backed the clichéd Monkeys-lite vocals and guitar with a crunching noise of rhythm section, keyboards and additional percussion. Much better than you might expect.

Following their excellent debut album this year I found myself rather looking forward to The Crookes when it transpired that they’d be playing the same day and stage as Ash. In their earlier days paying their dues at Fuzz Club I’d been none too impressed with what at the time felt like just another jangly pop band. Now that they’ve refined their sound and brought to the fore George Waite’s wonderful vocals and the ‘50s rock and roll influence they are really rather good. A perfect a treat in the Sheffield sunshine.

‘Chorus of Fools’ opens the set of material that’s drawn from both Chasing After Ghosts and EP Dreams Of Another Day. Before ‘Backstreet Lovers’ – the first song the band ever wrote together – the band apologise for pinching an area of the city for their name, despite not being originally from Sheffield. Thanks to their onstage charm and high quality songs the audience let them get away with it. But then again, with tracks as classic sounding as ‘Godless Girl’ and closer ‘Yes, Yes We Are Magicians’ they could just about get away with murder.

Unlike The Phantom Band. Now, don’t get me wrong, their combination of beardy American rock and blog friendly synth music sounds exactly up the street of Pitchfork readers, and it’s certainly toe tapping enough, it’s just perhaps a bit lost on indiepop fans such as myself who’d rather a band focus on their songs rather than attempted genre cross-breeding. Bands like Johnny Foreigner, The Futureheads and Ash for instance. I’ve been saying across this festival that it’s almost as if someone’s booked this with Keep Pop Loud in mind. These top three on the main stage’s final day are basically a dream come true. Three of the best live bands that are operating at this level all together for FREE – something that all of the bands go to pains to point out makes Sheffield the envy of music fans everywhere.

Johnny Foreigner are up first. They’re a band that I’ve seen more than any other in the past two years. Needless to say they don’t disappoint. ‘Feels Like Summer’ is the seasonal set opener and  Alexei is beaming from the stage. The crowd is thanked constantly and the he repeatedly apologies for not being Frankie & The Heartstrings (whom the band replaced on the bill). “This is more people than we usually play to on a whole tour,” Alexei says with a whopping great big grin on his face. ‘Eyes Wide Terrified’, ‘Sometimes In The Bullring’ and ‘Salt Peppa And Spinderella’ are all proof that Waited Up Til It Was Light is basically one of the greatest albums of all time. There’s little else I can say about JoFo’s live set that I’ve not said many times before. I love them to bits, through the new songs and chaotic set closer ‘The Coast Was Always Clear’. 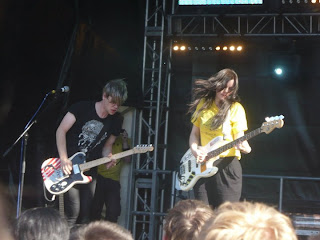 Johnny Foreigner's Alexei and Kelly. Photo thanks to Jo Fleetham
In many ways The Futureheads are the complete opposite to JoFo. Where the latter always seem on the brink of letting their songs collapse in on themselves, the former are main stage pros who take to the stage for a solid wall-to-wall set of bona-fide hits. Tightly rocking their way through artpunk classics ‘Beginning Of The Twist’, ‘Heartbeat Song’, ‘Decent Days And Nights’, ‘Skip To The End’, ‘First Day’ and ‘Carnival Kids’ The Futureheads whip the crowd into a frenzy. The crowd in turn, kick up masses of dust that billow over Devonshire Green. A surprise highlight comes when the band respond to someone at the front hollering “KELIS!” by doing an impromptu backing-less cover of ‘A’capella’. Considering there’s been no rehearsal for this it’s bloody ace and wets my appetite even more for the (apparently) forthcoming A’capella record.

There’s only one way that The Futureheads can end their set and they know it. Thankfully being the pros and good humoured gents that they are they set it up by getting the two halves of the crowd to “O-O-Oh-Oh” off against each other. Of course it’s ‘Hounds Of Love’ a cover that’s now as classic as Kate Bush’s original.

Ash just make it in time for their set, having pegged it over from Manchester. Bloc Party’s Russell joins them again on guitar and they plough through a fantastic set that blows up so much dust I’m still coughing. Everything that you might expect is in place and everyone knows every word to ll the classics. Even Johnny Foreigner are watching from the crowd. ‘Girl From Mars’ sets the standard and it doesn’t noticeably drop from there on. A-Z Series tracks ‘Dead Disciples’, ‘Arcadia’ and ‘Joy Kicks Darkness’ slot in with ‘Oh Yeah’, ‘Walking Barefoot’, ‘Goldfinger’, ‘Kung Fu' and a cover of ‘Teenage Kicks’ all of which keep the crowd going.

‘Twilight Of The Innocents’ is a quieter moment before the band leave the stage, only to come back on for a three song encore. ‘Jack Names The Planets’ is first of the three and one of the highlights of the day. Next it’s a cover of Weezer’s ‘Only In Dreams’ (that I’d never seen them play live before) and ‘Burn Baby Burn’ to close. Faultless.

The only issue is, Ash have been on longer than expected so it’s touch and go if I’ll be able to get into Screaming Maldini or not. Luckily they’re about to start their penultimate song as we get into SOYO. With the disco ball reflecting pink across the carnival flags and Maldini’s bonkers trumpet laden pop it’s truly a party atmosphere and a juxtaposition with the dustbowl of a main stage. There’s time to pick up a copy of their new Secret Sounds EP from Gina after the set, before it’s time to head out again to see Standard Fare at the Redhouse.

With there being so much to see at Tramlines there’s bound to have been acts that I’ve missed, and two of those that stick in my mind are This Many Boyfriends and Nature Set, who are supporting Standard Fare tonight. So apologies to these guys if you’re reading, I’m sure you were fantastic. Standard Fare certainly were. It’s not been many months since I caught them at this same venue supporting Sourpatch and today it’s packed out for the Sheffield indiepopsters. Tonight the band go from being an act that I like to ones that I’ll gladly devote many many hours to. Fantastic musicians playing wonderful songs, Emma and the boys seem as delighted to be there as the crowd is to see them.

They play a mixture of songs from debut album The Noyelle Beat and their forthcoming second record and blow everyone away. ‘Fifteen’ is the opener and ‘Philadelphia’ and ‘Kudzu Girlfriend’ are amongst the highlights of what’s a very strong collection of songs. Also, as a Star Wars fan from back-in-the-day I’m pleased to hear a newbie beginning with the lyric “I’m not Darth Vader, Luke I’m not your father”. With one last trick to pull out for the encore Standard Fare follow a never-before-performed song they claim is ropey (it’s not) and then offer us a cover version. Rather than the expected indiepop obscurity, it transpires that this cover is none other than ‘I Want To Break Free’. If there’s anyone ashamed of knowing all of the words to one of Queen’s cheesier moments then no one’s showing it. It’s a great sing-along moment and a perfect way to close the weekend.

Best festival of 2011? Hell, yes. God knows what Tramlines 2012 will bring, but here’s betting it’s epic. We’re at a time when Sheffield’s music scene picked itself up and dusted itself down, and this time next year one of our new local heroes is bound to have broken through. For anyone that may have thought it’d disappeared, Sheffield – thanks in part to Tramlines – is well and truly at the centre of the musical map again. And long may it stay there.
Posted by Lee at 06:00