It’s fitting that it’s Johnny Foreigner that are headlining the Windmill this night (Sat July 9th). My introduction to Alcopop! Records came through JoFo’s signing and it’s through a support slot that I first saw Stagecoach. The aforementioned aside though I’ve managed to miss seeing the rest of the Alcopop! roster, so getting them all (bar Freeze The Atlantic) together in one place proved impossible to resist. Brixton’s a fair trek from Sheffield, but with Mrs KPL in tow I was at Alcopopalooza III.

We arrived part way through Bellman’s set. Out in the compact beer garden with a mic stand wrapped in foliage we caught the Norwegian gent entertaining the expanding crowd with just his acoustic guitar for company. Sadly as we’d missed the opening we were only just getting into the set as it finished. But not to worry, at Alcopopalooza no sooner than one talented act leaves the stage than another is taking to it.

In quick succession we’re treated to acoustic sets from Dexy, Shoes & Socks Off and Hymns all of whom bring something very different to the table. Dexy (of Dexy & The Hand Me Downs) starts off with his acoustic pop, that whilst straightforward delights with it’s excellent songs and genuine performance. One song is dedicated to his cat that recently passed away and we’re treated to a cover of Weezer’s ‘Susanne’ that provides an excellent reference point for where Dexy sits in the pop pantheon.

Shoes & Socks Off is slightly more offbeat, alternating between electric and acoustic guitars and making use of pedals. His fuzzy indiepop is as good as anything during the day so far and it’s only once I sit down to review the gig that I regret not buying a copy of the forthcoming album from the chap.

Completely different yet again is Hymns. The Big Scary Monsters signed band are playing acoustically for the first time, playing radically altered versions of their noisy punk tracks. Stripped down to simple percussion, an acoustic guitar and a keyboard you’d be hard-pressed to have guess who they were. Still with the same strong vocal in place Hymns set is fantastic, brining into focus simply how well written their songs are. 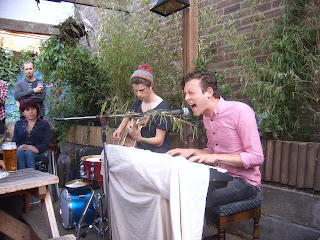 Hymns in the garden. Photo by Lynn Sheldon
Topping off the outside section of the mini-festival was Katie Malco, who proves to be an outstanding highlight. Wowing the garden that’s so packed that people are having to watch around corners Katie had plenty to deal with including people pushing past and an Alsatian trying to muscle in on vocals. Still by keeping everyone’s attention on her and her songs Katie made it clear that she’s a real talent. We’d not have made ‘Florence Nightingale’s House.’ Track of the Week if it was otherwise.

After grabbing food from the BBQ team KPL heads inside to find Delta/Alaska have already begun their set. A jarring contrast to the outside vibe, Delta/Alaska’s music seems to thrive on darkness, so it’s appropriate that the corner of The Windmill that holds the stage is as dark as it’s possible to get in the very early evening. Playing songs including ‘D.L.O.I’ (from the Hello Pink Mist compilation) they made an excellent argument for being ones to watch and proved beyond any doubt (along with all of the other acts of the day) that Jack Pop! has flawless taste in music….

But I’m sure that you knew that already, after all the Alcopop! roster is going from strength to strength and there’s still an evening full of these acts to come at this stage. So come back tomorrow for the second part of the KPL Alcopopalooza review when there’ll be words about The Attika State, Ute, Jumping Ships, LightGuides, My First Tooth and of course Johnny Foreigner.