Album Review: Alcopop! Records - We Grew Up On A Diet Of Jurassic Park And Sensible Soccer (and all we have left is this lousy record label) 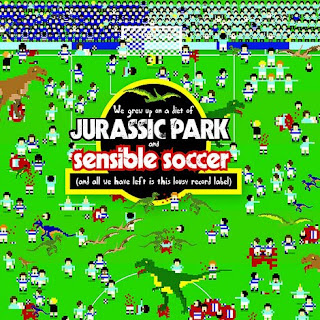 It may be more a community than target market, but Alcopop! Records certainly know the sort of people who buy their CDs. Jurassic Park was one of  (if not the very) film that I saw at the cinema. I really liked dinosaurs when I was a kid. Now, it’s safe to say, I’m more into my indiepop. We Grew Up On A Diet Of Jurassic Park And Sensible Soccer (and all we have left is this lousy record label) basically feels like it was designed for me. But then it would.

I only came to Alcopop! relatively recently, with their signing of Johnny Foreigner. As such I’ve had some catching up to do with the back catalogue, but even if you're a pop fan completely new to the label, We Grew Up… is an excellent place to begin, covering from the first release on the label (Encyclopedia’s ‘Emily’) to very recent signings LightGuides. Across the way it traverses their big stars (Johnny Foreigner), long-time heroes (Stagecoach, My First Tooth), sadly split geniuses (Elephants), and otherwise forgotten greats (Hush The Many (Heed The Few)), alongside everything in between.

Well, everything may be a slight exaggeration. Emo-rockers Wolf Am I are oddly missing. But seeing as they’re now peddling landfill indie under the name Viva Brother, it’s probably best we forget them - for the meantime at least.

Anyway, Alcopop! being Alcopop!, We Grew Up… isn’t (and never could be) just a compilation of stuff that’s already appeared. Psych-folkers Ute take the opportunity to cover Elephants ‘Strong Arms’ single, the result of which is the most left-field moment on the CD. In turn Elephants unofficial World Cup anthem ‘Ivory Coast (To Victory)’ is dusted off as a bonus track, tucked after a minute of silence. Whatever yr experience of the label, there’s going to be something new on this, basically perfect, compilation CD.

It’s rare with compilations that it’s impossible to pick out any highlights. Here everything is utterly brilliant, regardless of familiarity. ‘Emily’ is a giddy rush of adolescence set to glam pop that’s as instantiations as you’d care to dream a song could be. Midget’s pop-punk may be about as different to My First Tooth’s indiepop-folk as a T-Rex is to a Stegosaurus but that doesn’t mean it’s possible to pick between them. Both ‘Big Infatuation’ and ‘Margaret Yen’ make you feel giddy and full of life as only the best pop music can. And that’s before the brilliantly bonkers Screaming Maldini or much missed goFASTER>> are even mentioned!

“We make our own mythologies” JoFo’s Alexei sings on ‘Cranes And Cranes And Cranes And Cranes’. It could well be the defining statement of our generation and Alcopop! have made their own mythology better than any other label you care to mention. It’s a world of excellent pop music, happy nostalgia, sporting underdogs, positivity and fun. There’s no better distillation of this outlook than on We Grew Up On A Diet Of Jurassic Park And Sensible Soccer (and all we have left is this lousy record label).