Track Of The Week: Paintings Of Ships – Love Will Always Follow You Around

It's been a bit of a hectic week on the pop front. Coldplay landed a new single. Kaiser Chiefs came up with a new idea for releasing albums. And Nicola Roberts from Girls Aloud unveiled the video for her debut single (which sounds a bit like M.I.A. remixing The Go! Team). So this weeks most essential track that you absolutely have to hear is from Paintings Of Ships, and it's called 'Love Will Always Follow You Around'

This single was released as a free download back in April, and as such isn't perhaps as new as the above mentioned. But what it is is so much better.

Paintings Of Ships are based in North London, but come from all over the place. They like mentioning that their (Matt) drummer is from Ashby-de-la-Zouch which bares repeating as it gives the me the chance to mention the Leicstershire towns other musical exports; Young Knives and Cat from Pris. The other two members of Paintings Of Ships are guitarist/singer Daniel and bassist/singer Catherine. 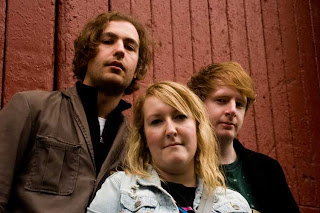 As a band they're only about 18 months old, having formed at the end of 2009. But already with 'Love Will Always Follow You Around' they've achieved the indiepop perfection that so many bands spend their careers falling so far short of.

Their early 90's influences may be apparent, but unlike groups such as Yuck - whose debt to the era centres on a single set of groups - Paintings Of Ships look to a wider sonic pallet from Sonic Youth to Blur to come up with a killer combination of massive hooks and fuzzy guitar noise. It's genuine pop that makes yr head spin. Listen to 'Love Will Always Follow You Around' and you'll just want to pogo around in the park in the sunshine.

Remember the name Paintings Of Ships. They'll be one of your favourite bands by the end of the year.
Posted by Lee at 06:00

Email ThisBlogThis!Share to TwitterShare to FacebookShare to Pinterest
Labels: Paintings Of Ships, Track Of The Week 2011