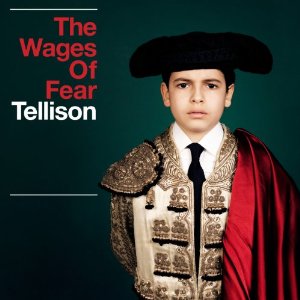 I pretty much bypassed all previous waves of punk and emo as they broke. When pop-punk was the rage in my teenage years I was more concerned with other – non pop based – things. The harder British end of things that included Hundred Reasons simply passed me by... and I sidestepped haircut emo on the grounds that it was a bit shit. Now that I've got more of an open mind and open ears Tellison drop The Wages Of Fear, and make a stab at taking the album of the year crown.

Not that Tellison are an emo band but they do bear inflictions - a guitar sound here and a strained vocal there – that may have been enough to put me off a few years ago when I thought I knew what I liked. What's key is these elements being joined by multiple part harmonies, synths and drum machines to create something affecting and transcendent of any genre. In short: The Wages Of Fear is a collection of immediate, instantaneous songs, superbly written and excellently performed. Tellison write songs that will endure.

Take 'Collarbone' for one. The lead single from the album that was released as a 7" on Big Scary Monsters at the end of last year. Six months on now and it's still on constant repeat. Likewise there seems very little chance that anyone will tire of 'Say Silence (Heaven And Earth)' when we're still finding joys in the band's 2007 debut Contact! Contact!. And these are the full throttle singles.

'Horses' takes a different tact, starting with a crunch before a post-hardcore bass riff is joined by squealing guitars and a chorus that recalls the moments where The Automatic delivered what they promised. It's truly exhilarating and shows, with clean production, the heights the best of our bands can scale when given half the chance. But for all its firepower (and it boasts firepower to rival that of You Animals 'Shotgun Valentine) and vigour 'Horses' isn't the best track here. Neither is the epic brilliance of 'Rapture'.

No, that's a contest between the aforementioned 'Collarbone' and opener 'Get On'. Despite the incongruous title it boasts a lyrical theme that cuts straight to the core. Boasting a piano in the mix and chiming guitars the lyrics “I picked up some moves in my youth and I'm scared that I've lost them” and “I may have some writers block but I'm still useful to you.” really hit home to someone who's looking failure in the face pretty much everywhere right now. “Do I quit trying to write this book?” they ask. I'd suggest that they keep with it, cause if the book's half as good as The Wages Of Fear it'll be worth battling through the block.

With the emotive drive coming from failures and curtailed romances The Wages Of Fear is easy to relate to. There's a tremendous amount of uncertainty in most of our lives at the moment, and what we need during those times is to listen to a band who we can shout along to as they try to exorcise their own demons. An essential purchase.
Posted by Lee at 06:00