Album Review: Pete And The Pirates - One Thousand Pictures 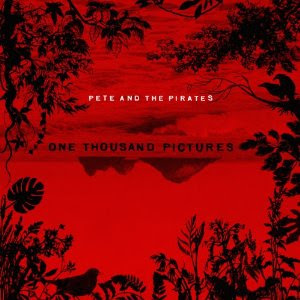 Considering their complete lack of gimmicks, Pete And The Pirates are a pretty spectacular group. With their debut album Little Death quietly sweeping up in 2008's end of year lists - thanks to excellent songwriting and a hearts-on-sleeve approach - they created a lot of anticipation for album number two. One Thousand Pictures may have been a long time coming, but boy is it worth the wait. Exquisitely crafted and finely honed, Pete And The Pirates have surpassed all expectations and released one of the best albums of 2011.

Not that you'd expect that from the understated opening of 'Can't Fish'. Chiming guitars and intervening keyboards cover the percussive splashes in a beautiful melody that's lead by what's Pete And The Pirates signature calling card – a perfect vocal. Chief Pirate Thomas Sanders has a voice that can melt hearts from across the room, and it's this factor that chief links the band back to the days of their debut album. Otherwise musically, things have evolved somewhat.

Frequently more minimal than might be expected, Pete And The Pirates have mastered the motorik beat and deploy it to great effect. Witness lead single from the album 'Come To The Bar'. It's their longest song to date and prominently uses a keyboard over the Krautrock groove with soaring choruses that will put a big silly grin on yr face. Despite the running length of over five minutes it doesn't outstay it's welcome and eventually wobbles itself apart to make way for the metronomic tick of 'Winter 1', a song that takes multiple listens before revealing itself as a whirring masterclass in understatement.

More conventional is next single 'United'. With bouncy guitars it manages to sound at once a classic and unsteady on it's feet it's the most likely on the record to get stuck in yr head. It's understandable why they've singled it out for radio play but doesn't stand out any more in the context of One Thousand Pictures than The Rumble Strips recalling 'Motorbike' or atmospheric 'Shotgun'.

The latter of these could easily be argued to be one of the best songs on the record. Creeping and broody it's a hell of a departure from Little Death. A steady beat and a drone accompanies the vocal and little else for the most part, before a Morricone style guitar part winds it's way through the fog. But 'Shotgun' has competition – from closer 'Half Moon Street'. The best example of that aforementioned vocal and featuring the lyrics “Don't make me feel stupid, I'll do that on my own” it's a wonderful and memorable way to close such a terrific record.

Aside from an ill-considered (and far too rapid) fade-out on ‘Blood Gets Thin’ (which is later reprised), there are no holes to poke into One Thousand Pictures. What it lacks in giddy anthems such as ‘Mr Understanding’ it makes up for in subtlety and a lasting satisfaction that comes from repeated plays, whilst the three year wait since Little Death is more than made up for by ‘Come To The Bar’ alone.

Email ThisBlogThis!Share to TwitterShare to FacebookShare to Pinterest
Labels: Album Reviews, Pete And The Pirates