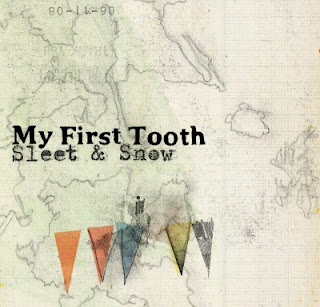 'Sleet And Snow' itself is a sample from My First Tooth's full length record Territories, and as it's backed by one new demo and a live recording it's very much a single rather than an EP. However, as said record and the band who made it have been totally under-appreciated by pretty much everyone in the world this deserves a full review in order that you understand completely what you've been (in all likelihood) missing out on.

Like the artwork, there's a timeless quality to My First Tooth's folky indiepop. Rooted in acoustic instrumentation and backed by an array of percussion, there's no pomp to MFT, 'Sleet and Snow' is delicate and sublime. Torn between the banjo jangle and piano tinkling, the ears soon veer towards the vocals which waste no time in getting to the hook “If you're sleet, I'm snow”. Of course from that description you could be fooled into thinking that MFT are Mumford wannabes, and that's the fault more of language than anything else, for where M&S can frequently grate with their ambition of mass appeal and shiny production, MFT are rougher around the edges with charm and heart written all over their music.

Opening with whistling is a brave move on the demo of 'Courthouse' but as the acoustic guitar is backed by little other than this, hand-claps and vocal harmonies, the emphasis is placed on how stripped bare the band are. At times it feels so slight that it might just blow away in a breeze, but the more sparse moments somehow serve to anchor it and ensure that 'Courthouse' is all the more beautiful.

Last up is 'Take The Airship'. Recorded live it has a wonderful title and the feel of a lullaby. Fingers brushing on the strings can be heard adding to the feel that this is proper folk music. Folk as in music of the people, designed more to be performed live to those who happen to be around. And where folk is more and more frequently used as a term to sell records and neckerchiefs 'Take The Airship' feels really special. Like being sung to sleep by someone who means the world to you.
Posted by Lee at 06:00