EP Review: The Half Rabbits - Optimists 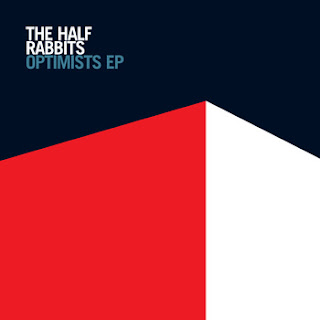 Released: 19th March
Label: Self Released - get it from The Half Rabbits Bandcamp

Stealthily down in Oxford The Half Rabbits have been concocting some of the freshest and best post-punk in the UK. Their track 'We'll Sleep Again' proved to be a fantastic introduction to the group on the Spires compilation, demonstrating their way with tightly controlled songs, repetitive guitar motifs and snappy drums. Well, less than a year on from releasing their debut album they're rolling out more new material already and breaking out of their Oxford confines. With the Optimists EP The Half Rabbits are putting forward a case for being the most vital young act in Britain.

None of the four songs on Optimists outstay their welcome. Each is dispensed with in under 3 and a half minutes, making its point and abruptly concluding. It's a method that feels right, if somewhat jarring. There's the expectation of some concluding coda thanks to the experience that we've had with more successful post-punk and new wave influenced bands of recent years, but just goes to show how The Half Rabbits are more in tune with the original ideas of the genre than simply the aesthetics.

Take EP opener 'Gasoline'. Tackling the issues of oil slicks and the increasing fear of losing the resource the songs builds up the sense of dread that Cold War era groups managed so effectively. Whilst the lyrics such as “I see the oil slick grow each day” you can feel the oncoming disaster whilst the guitar chimes and popcorn keyboards narrate the tension. The nearest comparrison in contemporary times to this would be early Bloc Party, but where they veered towards po-faced-ness The Half Rabbits keep everything tight and snappy.

'Poor Me, Poor You' completely changes the pace, with a spiky punk kick. With the tightness of early Wire and a frantic pacey chorus it's the most urgent song on Optimists and is certain to win over all those who hear it. Still, at KPL Towers it's following song 'How The West Was Won' that proves to be the EP highlight. Again true to the post-punk spirit it expands it with a quiet/loud dynamic that makes us think of Magazine being played by Pixies. mpeccably produced, the guitars move to and from the fore for either texture or drama. The vocals are, as is a Half Rabbits trademark, emotionally controlled, serving to heighten the tension in the music. It's really special and a wonderful vindication of them as a group.

Optimists closes with 'Extremadura', a more creeping-ly brooding track where the guitars wind through darkened streets that are set out by the cymbal splashes whilst the bass stalks behind. Frontman Michael Weatherburn is at his most Bowie here, with his vocal pitched somewhere between a croon and a bark declaing “It's been a long time” menacingly over again. Sound clips appear in the distance and add to the film-noir feel of crisp melodrama. Stunning.

With these songs in their arsenal and not even being present on an album there's no telling how good The Half Rabbits are going to be when they really hit their stride nationally. As for Optimists, it's going to give everyone else a run for their money when it comes to deciding the best release of the year.
Posted by Lee at 06:00

Email ThisBlogThis!Share to TwitterShare to FacebookShare to Pinterest
Labels: EP Reviews, The Half Rabbits