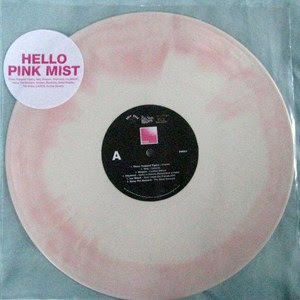 There's little sexier than a pink 12” arriving through yr letterbox. And there we can end the inuendo. This compilation from the Pink Mist collective (Holy Roar, Big Scary Monsters, Blood And Biscuits) is a fantastic introduction to the three labels and was originally released for last month's record store day. And if you don't know what to expect, could prove to be a bit of an eye opener.

One of the bigger names on the compilation, Three Trapped Tigers open proceedings and are becoming rather renowned in certain circles for their 65daysofstatic style post-rock electronica. On the basis of 'Cram' you can really understand why. Its percussion is clattering whilst the lower end throbs underneath math-pop guitars. Similarly fresh is Teej, whose 'Galactic' is like Midnight Juggernauts should sound. Epic and blissful, this is instrumental pop for prog fans. And yes, that's a compliment.

Knowing that BSM are involved it's not a surprise that there's a few examples of noisy, abrasive art-punk.†Hymns† and Shapes both bring two piece a two piece dynamic and earsplitting songs, whilst Grates attempt to throw with a hip-hop sample before throwing 'Aneurysm' full pelt in yr face. As brutal as these can get however, it's Hang The Bastard who bring the heaviest moment on Hello Pink Mist.

Metal with a smidgen of hardcore influence 'The Great Destroyer' will sit well with Mastodon fans but is without any wankery or prog-isms. It's raw right now, but there's no doubt that Hang The Bastard will refine their sound before long. Unlike run,WALK! whose screaming assult is choc with nasty sounding guitars and what may have at some point been a keyboard. It's barely coherent and much more frantic than anything else on offer.

Like Side A, Side B of the vinyl offers a plethora of unusual treats. Whether it's Bastions' method of getting in and out whilst causing as many casualties as possible on 'Warmth Of The World' or Delta/Alaska's gorgeous and intricate fuzzy indie-math-pop there's something to discover that you won't have considered before. It makes it something of a shame that the vinyl has sold out already. Still, you can investigate the bands separately, and in the case of Delta/Alaska I strongly recommend that you do.

The last two tracks that come highly recommended from the compilation are LA2019 and Tall Ships. The latter of which I can guarantee you are going to come across elsewhere before the year is out. On Big Scary Monsters things are really starting to happen for the band, and on the basis of this remix of 'Snow' you can hear something really special. The glitchy beats back the original vocal croon, whose slight whine betrays a Radiohead influence, but surpasses it in every way. It's ACE! But arguably pales into comparison to 'Water' by LA2019, whose future-pop is way too short at just shy of five minutes in length. And it's not often I'll say that.

It is however often that I'll stress how amazing the British underground is right now. There's plenty of entrance routes and plenty of overlapping scenes. For the heavier and more experimental end of things say hello to Pink Mist!
Posted by Lee at 06:00