It's a fact that Sheffield's not as hot as it once was, but nonetheless it's a city where it's possible to go out on any given night and catch a gig. So, last Friday that's what Keep Pop Loud went and did.

And ruddy good job we did too.

Opening for NME hyped duo 2:54 we caught a hot and very young five piece called Jack Rabbit. Now, if we're honest that's not the strongest name in the world but that's easily forgotten about when watching in the flesh. Astounding for only eight gigs old (in the full band incarnation) they played tightly and easily overcame the glitch that meant the first third of their opener had to go off vocal-less.

Frontlady Olivia-Roseli Neller is clearly the focal point for this group, her very strong, distinctive vocal and charismatic performance leading the way for the crisp, shoegaze influenced indie rock. But, as we saw thanks to the glitch, even when the vocals are taken out of the equation there's still a spark and widescreen sensibility that ensures the bands creative success either way.

Whilst at this stage in their musical endeavour it's impossible to lump too much praise on the group, what's certain is that we'll be hearing a lot more from them. They've an EP recorded, which contains many of the highlights from their short live set including the cinematic 'Atlas' that you can grab a listen to on their Facebook page.

Now, let's see an image of the group in action: 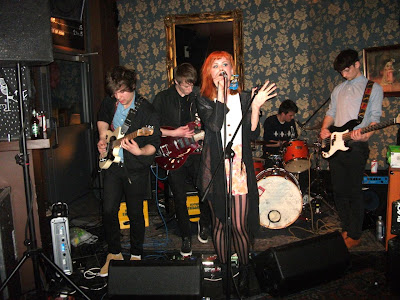 (that was taken from their Tumblr I've resized it badly)
The next Jack Rabbit gig is at The Harley in Sheffield on May 22nd. You really should go as it's a fantastic little venue, and there's something in Jack Rabbit that you could really love
Posted by Lee at 06:00