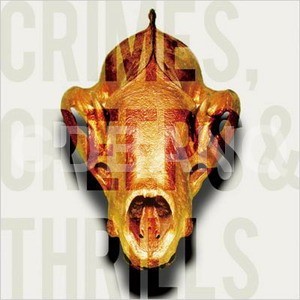 Crime, Creeps & Thrills has all of the hallmarks of a classic indie rock record. At risk of spouting cliches, let's get out of the way the fact that ever song here sounds like a single and You Animals have, on their debut, produced the record that heaps of more successful bands spend their life trying for.

Opener 'Theme From You Animals' wastes no time in upping the anthem states. Self-titled songs are notoriously tricky, but You Animals repetition of their moiniker for the chorus is thrashed out over crisp and nimble guitar work that flies like We Are Scientists at their best. And under three minutes in we hit track two, former single 'What You Want/What You Need'.

Despite this being the moment You Animals caught our ear it sits as one of the less adrenaline songs of the first half of the record. This fact says quite a lot about the strength of the surrounding moments. The vocals trip over themselves a-la Young Knives whilst the beat sends you straight to the dancefloor. Air punching backing vocals complete the moment and like the rest of Crimes, Creeps & Thrills is guaranteed to wedge itself in yr brain.

Following 'What You Want' is possibly the strongest run of indiepop hits since The Futureheads last let rip. 'What A Shame, Lorraine' fleshes out the dual guitars with keyboard flourishes whilst 'Communicate' ups the ante with the hard left and right panning on the guitars giving us some of the most exhilarating pop in a while. It's 'Halfway To Heartbreak' which takes prize position as king of kings on Crimes however. Punk-pop guitars and the biggest chorus on the LP combine with “oh-oh-oh”s on a massive hook that's addictive enough to get us to hit the repeat button. Repeatedly.

So as not to misrepresent You Animals, they are capable of slowing it down a notch. 'Western Bridge' replaces the keyboards with a piano and creates a sense of nighttime fatigue, growing into a huge and unexpectedly stadium anthem.

Arguably, Crime, Creeps & Thrills is front-weighted and on the first few listens the attention does seem to sag towards the end of the second third but like with The Answering Machine's recent album multiple listens get the songs ingrained with each having something to recommend it. Be that the rapid-fire drumming on 'All The Rage' or the way that 'Every Day Is Like Friday Night' races the mind through a nighttime city on horsepower and vocal momentum. More than anything else though, side two has to recommend it the best closing track of 2011 so far.

'Shotgun Valentine' is absolutely massive! The thunderous drums peel back a fog of war conjured in the opening bars whilst guitars race for the sky ready for the vocals to smack us with the chorus. “Last night was the last time that I wanted to see you / My shotgun valentine / Today you know I want you to stay”. Need say no more really. It's recalls the time that mainstream indie bands of the mid-00s sounded exhilarating.

If there's one more thing that warrants a mention it's the frequency that You Animals pepper their songs with outros and interludes. On headphones it can seem a bit meddling to the pace, working only between the very quickest tracks ('Communicate' and 'Halfway To Heartbreak'). Yet when listened to properly at home settles the record no end. And that's the point with You Animals, there's little touches to Crimes, Creeps & Thrills that means it is, on some level, always perfect to listen to.
Posted by Lee at 06:00

Email ThisBlogThis!Share to TwitterShare to FacebookShare to Pinterest
Labels: Album Reviews, This Is Fake DIY Records, You Animals