...for when there’s far too much good pop for me to talk about it all properly

Art Brut confirm all the details of their fourth album. It's called Brilliant! Tragic! and the artwork is brilliant. 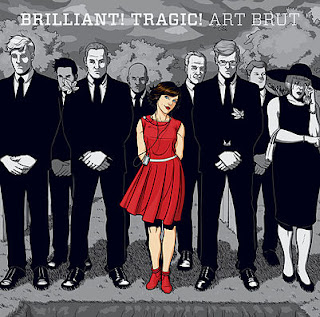 With the free download of new song (that's not on the album!) 'Unprofessional Wrestling' they've cemented their place as returning international indiepop treasures.

Guillemots are back, after last years pretty-damn-good solo record from Fyfe Dangerfield. The two tracks online thus far hint at a pretty schizophrenic record. Free download ‘Walk The River’ drags out their gentler side into something pretty, hazy and hypnotic whilst lead single ‘The Basket’ heads towards electro territory. Sounding more like an 8-Bit remix with aggressive keyboard bloops taking centre stage, the band (Fyfe’s voice included) to the rear. Unexpected considering the acoustic successes of Dangerfield’s ‘She’s Always A Woman’. ‘The Basket’ is also not entirely brilliant; although the poor sound quality of the radio rip may explain this – Guillemots have always been ones to benefit from a proper speaker set-up. Either way, we’re a long way away from the gorgeous wonder of Guillemots fantastic debut.

Everyone's favourite former Long Blonde, Kate Jackson, has unveiled yet another song on soundcloud. Again it's only a demo, but 'Weightless' manages to hold a menacing air and a classic pop aloofness. It's the most promising of the demo songs that Kate's put out there so far (providing you ignore the clarinet section four minutes in) and points towards a fairly eclectic album that I still hope if forthcoming.
WEIGHTLESS 24 2 11 by KateJackson

In bullet points then:
- Johnny Foreigner self-release a download EP of their non-Alcopop! material from 2010 (called There When You Need It) that includes new song 'A Kings Heath Story'

- Standard Fare are back already! Despite their debut album only coming out last year and a split 7” already having come out in 2011, Standard Fare have another single due out very soon. It's called 'Suitcase' you can listen to it below and order it here. It's very very ace!
Standard Fare - 'Suitcase' from Melodic on Vimeo.
Posted by Lee at 08:26