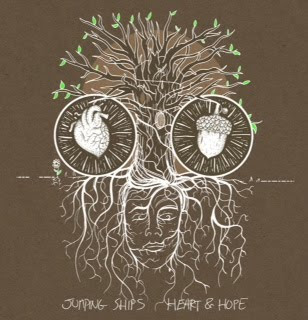 What strikes immediately about 'Heart And Hope', Jumping Ships first single for Alcopop! Records, is how bloody huge the thing sounds. It's a dead cert for a highlight in their live sets and a very good choice to start their campaign with.

Of course, I don't mean that it sounds huge in a pompus stadium way but rather that it sounds huge in how much it manages to pack into 3:40 of punk-pop. The band cite post-rock as being a large influence on their sound and it's certainly a lot more noticeable on 'Heart And Hope' than it has been in the past. It contains a level of subtlety and intricacy that really allows Jumping Ships to shine, particularly in the interplay between the guitars and drums.

Yet in doing this, they've sacrificed none of their punchy anthemic brilliance. Not that you'd know it on the very first listen. With 'The Whole Truth' being the epitome of immediacy it's easy to see this as a step back, but press play again and the multiple hooks become so ingrained in yr mind it could well displace previous Jumping Ships songs as a perennial earworm. Vocals bounce off each other in snappy harmonies and are perfectly complimented by the driving bass.

When 'Heart And Hope' soars it REALLY soars. When it goes full throttle on energy you'd better either hold on or jump straight in.
Posted by Lee at 06:00