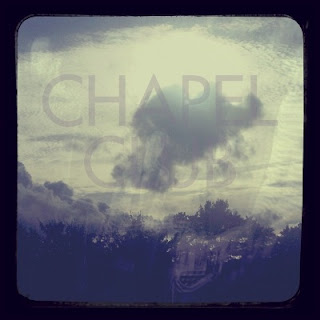 The Wintering EP is another one of those chronology fucking releases. Recorded after the sessions for Palace it was initially released beforehand as a special edition from their tour at the end of last year. Now it has seen the full light of day as a bonus disc to the special edition of the aforementioned album Palace which is where it has found it's way into the hands of Keep Pop Loud.

Chapel Club have gone on record saying that the music on Wintering was a step away from the direction they'd chosen for the album, and it's something that's instantly noticeable. Where Palace had the feel of Chapel Club reigning themselves in and focusing energies on conventional songs, Wintering sees them indulging more and allowing the music to run it's own course. That's not to say it's unrecognisable as the same band however. 'Running' especially shares some DNA with 'The Shore' and 'Surfacing'. The waves of guitar lapping around the vocal croon with a black and white brooding.

Wintering is still very film noir in atmosphere. 'Telluride' particularly featuring flecks of guitar that promise other worlds. The vocals alternate between Chapel Club frontman Lewis Bowman and a female singer credited as Hels Baron (?), but the distance at which they're set means they haze in and out of focus of the listener, more an instrument than vehicle for the lyrics. When the words do appear however it's only to reinforce the sensory opinion; “In dreams I saw the image of your eye”.

At only four tracks this isn't a very long release, but it's evidence for Chapel Club being more then gloom-rock chancers. 'Bodies' is barely there, with reverb and echo falling in over the calm calculated drums that head towards Joy Division territory. The stings which swoop in towards the end however are enough to make anyone swoon and certainly come from cinematic inspiration. As has been said before, Chapel Club certainly do not live an indie rock cultural vacuum.

For an eight minute long song, closer 'Widows' is remarkably controlled. Bass and rhythm guitar provide a disconcerting low end whist the lead guitar scales heights that Bowman's voice doesn’t. In the interplay between these two lead instruments there's certainly comparisons to be had with Suede and The Smiths. 'Widows' occupies the same night-time spaces as 'Sleeping Pills' by the former whilst if the vocals were to spill over into 'I Know It's Over' by the latter, it would seem as natural as the 'Dream A Little Dream' reference on 'Surfacing'.

It's fitting that the EP ends quietly, with restraint on everything bar the vocals. That Chapel Club already find it unnecessary to use the full power of their shoegaze guitars all the time shows how they're already much wiser as a band than their years would suggest. As with most EPs that come around as bonus tracks, Wintering isn't completely essential but it's a very strong argument to show naysayers that yr not wasting yr time on Chapel Club.
Posted by Lee at 06:00