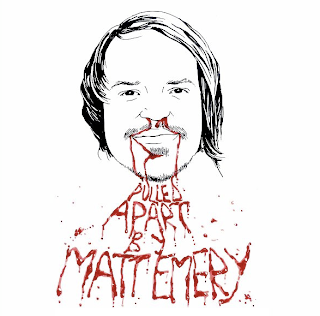 Released: Out Now
Label: Self-Released / Download it from Alcopop!

Shame on me for hardly having mentioned Stagecoach on KPL before. In fact, I'm not sure I've really said much about them since their split 7” with Johnny Foreigner when they covered 'Salt Peppa And Spinderella'. Funny that I should chose now and the side-release from their drummer Matt Emery to mention them again, for those of you that enjoyed the pared down acoustic rendition of the JoFo smash should well enjoy this release.

OK, maybe release is a bit far fetched for what is a free download release of acoustic Pulled Apart By Horses covers. Still this (almost) EP is rather unexpectedly brilliant.

Like the very best of covers, the songs are deconstructed and rebuilt again rather than just being straight played. Here Pulled Apart By Horses hard-hitting post-hardcore anthems and brought into acoustic territory with layered choral vocals, delicate pianos, strings and soaring lead vocal.

First track 'Hive Five, Swan Dive, Nose Dive' is the best example of this and a soothing yet epic slice of pop magic. Meanwhile, 'Yeah Buddy' has a jazzy feel, with accompaniment coming from barely more than a piano. The backing vocals lend the cover a haunting air that contradicts the fact this has been done with tongue in cheek (and entirely for fun) almost as much as the very idea of something being acoustic and post-hardcore at the same time does.

'Back To The Fuck Yeah' is more conventional, with Emery's acoustic guitar rendering the song a step closer to the slacker pop of Stagecoach that we all love, whilst 'I Punched A Lion In The Throat' couldn't be any further away. Chants overlap and collide into each other whilst the piano becomes a distant sound underneath. By the time everything's faded back into nothingness you realise that you may have just heard one of the strangest pieces of pop of 2011.

Really, you've no excuse for not giving this a go. It's a free download from the AlcoBlog (the Blog of Alcopop records) and if nothing else, may help you break yr other half into Puled Apart By Horses. Those with a taste for the absurd will particularly enjoy the juxtaposition of lyrics such as “I'll make you dance with my balls of fire” with the classical arrangements and at the very least it'll help us all to learn the words to some of the biggest rock anthems of 2010. God knows why Matt Emery put so much effort into this curiosity, but we're glad that he did.
Posted by Lee at 06:00