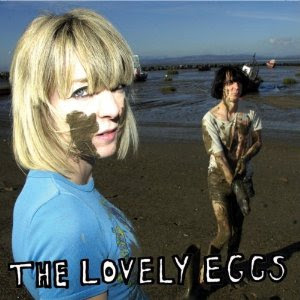 This is a bit of a belated review and apologies for that. I have been busy. Normally I could use the excuse that I was waiting for the album to sink in and reveal itself, but I know that you wouldn't fall for that here. It's The Lovely Eggs! If you've heard any of their stuff you should know what you're getting, and if you've not then now is the best time to correct this.

On their second album, Holly (guitar) and David (drums) rattle through 18 tracks in little over half an hour using little more than distorted guitars, drums, their voices and some children’s toys. It's shambolic, silly and so very fun.

Holly kicks of proceedings with 'Minibus' a classic tale of unrequited love, full of colloquialisms and backed by only her grungy guitar. Sombre and reflective it could be the most sophisticated moment The Lovely Eggs have in their arsenal, or it could just seem like that as it's followed by 'People Are Twats'. Either way, both are brilliant... but not as brilliant as 'Panic Plants'.

A opening monologue from David about OCD-isms paves the way for a semi-serious take on convincing yrself that you've forgotten to do something before leaving the house. A single listen is all that it takes to get the chorus ingrained in yr head. “Planting the seeds in the brain, they grow into panic plants” is either the most intelligent insight into human psychology committed to tape in the past few years or.. well there is no 'or,' it just is.

More refined and less schizophrenic than If You Were Fruit, Cob Dominos betters The Lovely Eggs previous LP and should, by rights, make them national treasures in the Art Brut and Half Man Half Biscuit school of outsider pop. Sadly, with not enough people shouting about idiosyncratic homegrown acts like The Lovely Eggs it seems unlikely to happen right now. Which, when the album contains indiepop dancefloor 'smash' 'Don't Look At Me (I Don't Like It)' and Undertones-y 'Watermelons' amounts to the biggest injustice in contemporary music (outside of people actually buying Glasvegas records).

Despite their simplistic approach, describing The Lovely Eggs sound isn't easy. There's always the temptation to draw a comparison to The White Stripes (especially on 'Hey Scraggletooth'), but they're far more musically naïve sounding and don't show off. So, twee-grunge would probably be more accurate. Or Tourette's-rock. Maybe.

Outside of the 'big' songs (can we call 'Fuck It' a ballad?) there's five songs including 'Muhammad Ali And All His Friends' (12 seconds) that refuse to go anywhere near the one minute mark. This results in one of the most charming, fun and instantly enjoyable releases you'll hear this year. Buy it and listen to it. I won't say any more as I'll just ruin some of Cob Dominos many smile inducing moments/punchlines.
Posted by Lee at 06:00

If you're looking for a solid contextual ad company, I suggest that you take a peek at Clicksor.