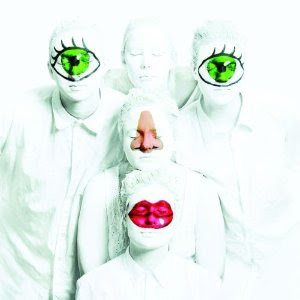 In the continued absence of The Hives, Those Dancing Days can easily stake a claim to being Keep Pop Loud's favourite Swedish band. Their debut album from 2008, In Our Spacehero Suits, stands among the best indiepop records of the past decade and with the mindblowing 'Fuckarias' leading off the album #2 campaign expectations were high.

To be fair to Those Dancing Days anything less than Album of the Year by far would of come as a tiny disappointment, so to say this doesn't quite meet the standards I'd have hoped isn't to insult Daydreams & Nightmares. Instead it's said to comment on how the album is 'merely' VERY damn good and possibly one of the best of 2011.

'Reaching Forward' proves to be an excellent opener. Cissi's drum fills scattering across the keyboard led sound. The vocal from Linnea once again heartfelt and touching. It has all the sonic watermarks of what I've always loved about the band. Lyrically, as with the entirety of the record it's heart on sleeve and affecting; “There is so much more to life than this / I just cannot say it straight to your face”.

If 'Reaching Forward' falls into the camp of songs detailing a suffocating and collapsing relationship it's polar opposite is 'I'll Be Yours'. An epic singalong with a hook to rival 'Fuckarias', it's held together by the bass and vocals whilst the drums rattle and guitar chops around. Again the keyboard melody is dominant but it's the addition of group backing vocals that make the single truly soar.

Although still informed by '60s soul and pop this new record sees Those Dancing Days add a more recognisable indiepop influence to their sound. 'Dream About Me' has the low slung, melodic bass of '80s New Wave acts such as The Cure whilst the aforementioned 'Fuckarias' takes the garage rock of (yep) The Hives for a sass-full spin. Although highlights, these are challenged by 'Can't Find Entrance' for the title of album stand-out. It's epic, yearning and wonderful. Listen to it now!

Side Two of Daydreams & Nightmares is where some of you who like ALL of yr music to be instant and punchy may drift off. Songwriting takes centre stage with the often whimsical accompaniments serving to flesh out the sound. 'Forest Of Love' is the most obvious example of this on the record, but with time could well prove to be the favourite of Those Dancing Days fans who are willing to go all of the way with the band.

Going out with a bang, Those Dancing Days mange to throw everyone off the sent with one last barnstormer and a closing duet. Said barnstormer 'I Know Where You Live Pt.2' gives Rebecka her best guitar moments, recalling the best of the 00's post-punk revival bands. The duet 'One Day Forever' meanwhile really gives Linnea the chance to flex her pipes against one of the best male indiepop vocalists around. The Maccabees' Orlando Weeks provides her with a jazzy counterpoint as their vocal lines wrap around each other over a subdued but memorable conclusion.

Despite song-writing contributions from several members of the band, Those Dancing Days have produced a record that's remarkably consistent in quality but that holds together as a piece of work in its tone and subject. You may find better indiepop records this year but they'll be few and far between. It'll probably have less heart too.
Posted by Lee at 06:00

Thanks for the honest review. I don't know anyone from Wichita records, but I do know that the best Wichita locksmith service. Can't wait to hear this one.