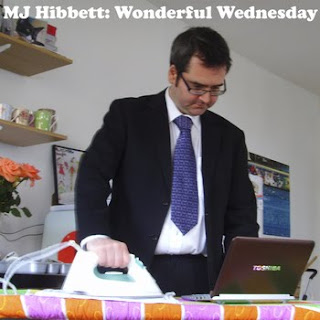 Peterborough born and raised, London based songwriter MJ Hibbett is essentially one of my favourite songwriters of all time. I've mentioned it before, but it bears saying again. His latest record is a solo album, done away from backing band The Validators and contains fourteen tracks recorded on Wednesdays in February. Hence the title.

It all sounds pretty DIY, with GarageBand drum loops and a basic lack of production. That's not to say that it sounds bad however, it's just all stripped down and simple with the music mostly there to provide a backing for the songs. And importantly the songs are bloody ace.

Of all the songwriters that are around at the moment MJ Hibbett is the one who has the greatest knack for getting under the skin of contemporary (Middle Class) life in the UK. And that is of course because he's just out there living it like the rest of us. 'Wonderful Wednesday' itself is a delicate little track extolling the virtues of working from home. Touching on little things like having fry-ups for dinner and being able to do the washing he makes the whole activity sound positively utopian, but that's Hibbett. As a songwriter he always manages to bring out the positives in what can be a mundane existence for some of us.

Yes, office work can be dull. Very dull but on tracks like '(Really Nearly) Lunchtime' and 'Is It Time To Go Home Now?' the small joys of deciding what to eat or learning new things from Wikipedia bring smiles of recognition and the understanding that actually, things could be much much worse. After all, this comes from a man who once said “A fridge full of nice things is my equivalent of bling.” Plus, '...Lunchtime' cracks out a great little electric guitar solo, and that's something that none of us can complain about

Like that other favourite songwriter of mine that I mentioned yesterday, Hibbett is a bit of a geek. That manifests on Wonderful Wednesday across the songs 'Let's Network' and 'Antidote To Cloning', both of which come from a comic book world of sci-fi. The former tells the story of how bringing a galaxy of businessmen to earth to use the conference facilities makes the hero of the story the king of the planet, whilst the latter sees Hibbett do the voices of different scientists in a story that culminates in what may be the least useful moral ever. It's still of course really bloody entertaining and features some trademark MJ Hibbett lyrics.

Elsewhere there's some more musically adventurous moments such as 'They Hate Me' which hides the vocals behind drum machines and echoing guitars, displaying the paranoia of playing to decreasing crowds. As always it's not all dark and gloom, “Sometimes they just need a wee,” he concludes. Album highlight (and a Track of the Week this week) 'Touch Wood' is plenty bouncy and fun, whilst 'Skies That Smile' is a Candle Thieves-esque summery shimmer that's really pretty.

There's plenty more about Wonderful Wednesday that deserves mention (the kiddie friendly ukulele numbers such as 'A Little Bit Excited' and 'One Finger' or a commentary on the Alternative Vote referendum ('I'm Saying Yes')) but essentially you'll already have an idea of what MJ Hibbett is about by now, so unless you're one of the other 119 people who has a physical copy of Wonderful Wednesday head over to his Bandcamp page, have a listen and exchange some money for a really good album.
Posted by Lee at 06:00