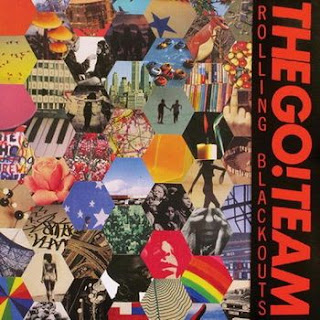 Album number three for Brighton pop'n'paste maestros has been a long time coming. But you can bet your life it's been worth it. Just look at what the title and the artwork there. Is there any way The Go! Team could let us down?

Stick this in the CD player/press play on iTunes and what's more apparent on first listen than anything else is that Rolling Blackouts is the most coherent album under The Go! Team name yet. You could even say that some of the songs venture on being... well, conventional. Yet at the same time, this never sounds like the product of any act other than The Go! Team. The key trademarks are in place, from the charity-shop-chaos textures to the far-too-loud drums. It's the collision of styles that won Thunder, Lightning, Strike it's Mercury nomination and the band so many fans across the world. So fear not, The Go! Team still sounds like several stages of a music festival going on at the same time in the middle of a carnival.

Which makes it easy to assume, when listening on a bigger system, that Rolling Blackouts couldn't possibly work on headphones. There's just too much going on. WRONG. It sounds wonderful. Perfect basslines roll over the clipping drums, the vocals are audible and the samples and backing choirs reveal themselves in a carnival of blissful melodies and contrasting sonic textures. There's very little else going on in pop music at any time in history that comes close to matching this in terms of depth and wonder of sound.

Thanks to it's status as lead single, it was easy to assume prior to hearing Rolling Blackouts that 'Buy Nothing Day' would be the clear cut highlight. Featuring as it does Bethany Cosentino from Best Coast on her best recording yet (and that's not to put down the ace Best Coast). These assumptions would be wrong again, as 'Secretary Song' and 'Throwdown' at the least, form an almighty pair that insist that yr feet moving and yr face smiling. 'Rolling Blackouts' itself rocks with surf-noise guitars like Sonic Youth at the beach. All four could lay claim to being one of the best pop songs in recent years, but whilst there is more of these indiepop numbers than perhaps we're used to across the past two Go! Team albums the hip-hop is certainly not skimped on.

'Voice Yr Choice' and 'Back Like 8 Track' have more brass fanfares than should strictly be healthy and the cheerleading chants battle the massive drums for supremacy. With complete ease The Go! Team show Sleigh Bells just how it's done. Special mention also needs to go to 'Yosemite Theme' which is the best thing to happen to banjos this side of the 1900's. Rattling over what sounds a lot like a lost '60s TV theme it collides with glockenspiels and cheap Casio keyboards to sound like the perfect moment on yr day off work when the sun comes through the miserable rain.

Mainman Ian Parton has hinted that this may be the last we hear from The Go! Team, at least in their current guise. As much as that's a shame based on the quality of Rolling Blackouts you do get the picture that should the project continue any further it will be a case of the band putting out Go! Team sounding albums for the sake of it and not progressing the sound. It's not that I think that little of the band or their/Ian's abilities but it's so very hard to imagine any way that Rolling Blackouts can be topped.