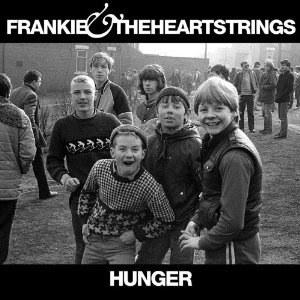 Even before Hunger was released there was some groups (usually found lurking on the Drowned In Sound message boards) that were ready to lay into Frankie & The Heartstrings. Either they were the latest in a very long line to go for the Someone & The Somethings band name or they were ‘landfill’ because they had the nerve to use guitars to write pop songs. Two things that I can honestly say I have no problem with. Quiet the reverse actually, using guitars to write pop songs and dressing sharply (as F&TH do) are two prerequisites for what I consider to be the ideal for pop stars.

For those that have been following Frankie & The Heartstrings early singles, rest assured that Hunger lives up to the promise. Everything’s been re-recorded with Mr Edwyn Collins taking care of production, and the result is a satisfying, cohesive and fun album that ticks all of the right boxes for literate pop fans. And thankfully it doesn’t feel as though they’ve shot their creative load just yet. The Dexy’s style brass that’s littered throughout the debut hints towards a bigger future, whilst their skill with a ballad will ensure they’re not trapped behind dancefloor fillers.

Still, when Frankie and co’ do crack out a four-to-the-floor as they’ve done on singles such as ‘Hunger’, ‘Tender’ and ‘Possibilities’ they are impossible to resist. A tour de force of 50’s rock ‘n’ roll, 80’s post-punk and modish inflictions awaits. Nimble guitars slink over splashes of cymbals and disco beats. Terrace chants are offset by Orange Juice style discordant flourishes, leaving songs and melodies bouncing around yr head and echoing off all sides of yr skull. It’s all perfectly complemented by the job Collins does in production, creating a record on the clearer end of the spectrum without sacrificing the songs to an artificial sheen. Everything sits just so.

Aside from the aforementioned big ol’ pop hits there’s some moments that truly sets Hunger apart. ‘Fragile’ is a wonderful ballad that holds it’s own across a six minute length without going into indulgence. It’s tight and snappy and, most importantly, heartfelt. The pick of the bunch however is ‘Don’t Look Surprised’ which manages to fit in all of the best bits of Hunger into one powerful track. Cymbals and high-hat create a rain of crashing metal whilst rapid vocals are delivered and a gradual build of guitars lead to a crescendo with the perfectly positioned brass section before an exquisitely timed exit closes the record. It’s the moment on Hunger that most hints at much more to come from Frankie & The Heartstrings.

Still, overall this is a simple album. Hunger will not be subjected to the same sort of artistic analysis or adoration as Radiohead’s latest, but nor really would you expect it to be. It will however win over the bookish kids who like to tap their feet at the local indie disco and dance like no one is watching in their bedrooms. These converts will keep coming back to Frankie & The Heartstrings and will use the band and Hunger as a starting point for explorations across pop culture and it seems certain that this five-piece beat combo from Sunderland will be there to help them through it and the myriad of other tribulations that life can throw.
Posted by Lee at 07:00