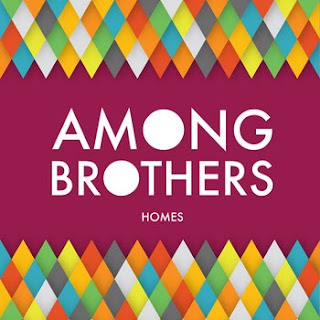 Finding home on Cardiff's Barely Regal Records Among Brothers are a six piece who count a violinist amongst their number. Homes is their first proper release and gets the dubious honour of being the first thing reviewed on Keep Pop Loud in 2011.

The five song release opens with the oddly titled 'Montgolfier', a miniature epic that announces itself with Efterklang style clattering percussion and some hasty group vocals that it's easy to compare to the most recent Los Campesinos! album. So I will. In reality this is barely more than an introduction to what is a début EP but it manages to be much more. It surpasses it's status and title and stands very much on its own.

Across Homes Among Brothers combine their influences into something organic, spacious and engaging. Take centre-point 'Sam, Isaiah and the Wolf' which showcases an organic rural sound. Combined with the straining of the vocals this helps bring to mind the sadly defunct Leeds heroes Grammatics at their most considered.

Elsewhere 'Bare Teeth' begins with the warm minimalism of Four Tet and adds little other than vocals for the first third before a break reveals a piano and violin. The maudlin sounds offer aural representations of wind and rain lashed spring days. There’s something about it that has the ability to transport us to the rained off days of our childhood. It’s pretty special really and perhaps the best track on the EP.

Closing Homes is 'Great Famine Family'. With a long running time of over seven minutes it doesn't outstay its welcome. Ideas are run and space utilised to the fullest, taking everything to conclusion. The “ba-ba-da” vocals bring to mind a dreamy sea shanty, an image reinforced by the lyrics “Washed in salt and dried in dirt, they made my bed below the earth”. Meanwhile the glockenspiel and naïve electronic sounds juxtapose a Boy Least Likely To twee-ness.

Interesting and accomplished. For a debut EP Homes introduces Among Brothers perfectly. Not as loud as some pop I may champion here, but reflective beauty rarely comes any better. For a band with so much going on musically it’s refreshing to hear this sense of space too.

For those who’d be put off by the ‘gentler’ tag – don’t be. This is as gripping as any faster paced music, but allows you to simply get lost in the ebbs and flows that come with the collision of instruments and styles if you so wish. For a combination of indie rock set-up and hushed electronics, finished off with a last gang left on the moors loneliness you can't go wrong here.
Posted by Lee at 18:59