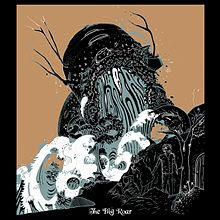 When the latest Muse album appeared the fact that the thee-piece had moved so far away from the sound that had ensured their success turned off a lot of fans. Someone somewhere rightly said they wanted back the riffs that “sounded like spaceships exploding”. I hope that whoever coined that phrase has been informed of The Joy Formidable and their début album The Big Roar.

Having cottoned on to The Joy Formidable early on I've been anticipating this album like no other début since Sky Larkin were pups. 2009's mini-album A Balloon Called Moaning was as close to perfection as such a release could get, its ambitious anthems getting me through a pretty crappy time. Last summer at Glastonbury saw the band give a Sunday Second Stage opening set all the gusto of a headliner, blowing away some of the weekend's major acts in the process.

In short, I was expecting a lot.

But not this, exactly.

Don't get me wrong at all here. The Big Roar is not a disappointing album. No sir. But those spaceship exploding riffs I mentioned, they're pretty new. The Big Roar is a loud record. And all the better for it.

'Whirring', one of The Joy Formidable's older songs is now joined by a maelstrom of thundering drums and swathes of cacophonous guitars and feedback, the kick doubling it's efforts and neatly crashing through thrash territory. Whilst 'The Ever Changing Spectrum Of A Lie' is a seven minute 44 second opener that builds the kind of swell with a three person rock set-up that orchestras seldom manage. Ritzy Bryan's vocals surfing over the melee with a sexy Welsh purr.

Clearly written and recorded with playing live in mind, these songs sound like arenas being cracked open; rivets and supports popped clean out of their fittings by the sheer magnificent racket that The Joy Formidable create. The evidence that The Big Roar presents shows that The Joy Formidable are already a massive band and are just waiting for the rest of the world to catch on.

At this moment in time, only having lived with The Big Roar for a week it's easy to pinpoint the older tracks from A Balloon... as being the highlights. 'Cradle' is still one of the best things ever recorded and the new version of 'The Greatest Light Is The Greatest Shade' makes for the most perfect closer I could imagine for a record of this scope. The trouble with this is that we've been living with these songs for two or more years, so it's always going to have been hard for the new kids to sit side-by-side easily.

This makes moments like 'Chapter 2' all the more remarkable, of course. Massive propulsive rock drums throw the guitars around the mosh pit whilst Ritzy alternates between that purr and an all out bellow. Its frantic passages evoking chaos and exhilaration better than any other song that I've come across in recent years.

At this stage in their career The Joy Formidable are on course better than any of us could have imagined. This album deserves to be the success it has the potential to be. The Big Roar may just turn out to be one of the most fitting album titles of the year. Let's hope they follow up the roar with a bite.
Posted by Lee at 08:35