Just a quick news blog for y'all. Ash, a band who are easily one of our favourites of all time, are making a comeback. Last year they announced that they'd be eschewing the album format in the future and they've just announced details of how they'll be releasing music from now on. The current project is an 'A-Z Series' of singles that has already begun with a free download from their website entitled 'Return of White Rabbit'. It's a dancey pop song that's definitely not half bad (we reckon about 7/10).

So first of all get yourself over to Ash and get hold of this song. Secondly, if anyone has any ideas to how this relates to being 'A' in the alphabet then by all means let us know. In the meantime let's be thankful that these three are still going and, for the moment at least, handing out freebiees.

Please note: KPL has worn the hat in the above picture.
Posted by Lee at 09:48 No comments: Links to this post

If we say that Pulp are possibly the greatest band of all time we're not being hyperbolic and we're not saying it to get up the noses of the 1960's purists, we're saying it because we genuinely believe that it's a possibility. With Jarvis Cocker at the helm they released a run of fantastic albums throughout the 1990's and into the 2000's and with said front-man had quiet simply the greatest pop star of all time in their mist. It's not just Jarvis' poetic turn of phrase or ability to get to the heart of social injustice that ensured such a place in pop history, but lest we forget that the man had the balls to get up on state at the Brits in 1995 and show a nations disgust at the shrivelled pop corpse of Michael Jackson pretending to be the sodding resurrection.

Since the Britpop bubble burst Jarvis left the national consciousness somewhat. The tabloids found someone else to pester whilst he maintained his artistic integrity, finally disbanding Pulp in 2002, after their sombre yet uplifting last record We Love Life. In 2006 the man returned with a brilliant solo album amidst a ton of bands who owed him and his former band a massive debt. Most of these bands are still around now and are the ones who are making an otherwise intolerable pop scene brilliant. Franz Ferdinand, Maxïmo Park and Art Brut may well of not existed on the national consciousness without the groundwork laid by Pulp for arch, literate pop. And without the influence of Jarvis and co. we can't see The Long Blondes as ever existing. Today saw the UK release of Mr Cocker's second album; Further Complications. This is why we're writing here today and why this piece has a more optimistic tone than the scathing attack on the pop charts that was going to be posted.

It's safe to say that Further Complications is not the best album that Jarvis Cocker has ever put out. To be honest we're not sure which one of 'the Britpop Trilogy' of His 'n' Hers, Different Class and This Is Hardcore we'd give that award to but to say that his latest release doesn't stand up to them is really no insult, especially seeing as it's still one of the best albums in what has been so far a rather exceptionally busy and good year. In our review of 'Angela' we said that Jarvis can do no wrong. We stand by that sentiment, as we'll demonstrate. Firstly let's preface this by telling you all that we HATE disco. I mean really hate it. It sends chills down our spine and makes us want to hiss like a cat defending it's territory. Now, as we were saying, Further Compilations ends with a nine minute (nearly – it's 8:45) disco workout. Said song 'You're In My Eyes (Discosong)' is totally brilliant. Using a backdrop of 'first-dance-at-a-wedding' type 80's pop Jarvis recalls a sad love song that instead of making us retch makes us swoon and visualise the glittering of the mirror balls and cheep flashing lights. Of course Jarvis is genius.

The highlight of this record though, for us is 'Leftovers' a pop song about meeting a woman at a dinosaur museum and … well let's just say the phrase “I'll make no bones about it is used”. The song cleverly veers towards the middle of the road, making the choice of subject matter all the more brilliant and apparent. Jarvis may be heading towards mid-life stage but where previously he was singing that “cunts are still running the world”, it's now obvious that they're running his more than ever. The man has one hell of a libido, and if popular music was created for something other than the sharing of sexual desires then no-one forwarded that message on to us. We're not going to go through a 'track by track' of this album or tell you which songs to download. This is for two reasons; Firstly: we wanted to get our gushing admiration for the man out of the way now so we can just sit back and enjoy the record without having to wonder what to write about it and Secondly: quite simply we think you should go out and buy it. If you don't own any Pulp material, while you're at the record shop or browsing on Amazon add Hits in too (it's as good a place as any to start). This record won't go any way to correcting the horrors that lay in the singles charts but to be frank we've just stopped caring about that now. We've always said that good music needs to appeal to at least one of the following: heart, hips or head. Jarvis Cocker's appeals to all three. 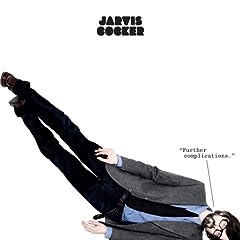 Keep/Pop/Loud
Posted by Lee at 16:24 No comments: Links to this post

We've been out of touch recently, in a quiet major way. Sorry about that, but we are incredibly busy sorting out what is very nearly a million and one things. As we sit here there's a copy of Watchmen that needs reading and a handful of reviews that we still need to do for DIY (not to mention games that need playing and a box set of Disney-Pixar DVDs that need watching). By way of apology for our extended absence we are once again "comin' at you" with an album round-up

Mastodon – Crack The Skye
9/10
One of the best albums of the year by far. This is Mastodon at their most melodic and heart-wrenchingly beautiful. There's so much going on on 'Crack The Skye' that we feel that even if we spent countless blog entries detailing it we'd still come up way short.

Super Furry Animals – Dark Days / Light Years
7.5/10
SFA have been going for so long and thankfully are still as good as ever. This is a groovy riffy album that encapsulates the summer. You can either let this wash over you in waves or you can sit and peel back the layers to get to the hearts of the songs. Either way is good.

The Maccabees – Wall of Arms
8.5/10
An absolute gem of a record that combines The Maccabees trademark sound of dual guitars with a more mature larger pop soundscape. Of all the songs contained on Wall of Arms the highlight is undoubtedly 'Dinosaurs', which with it's dramatic brass section is highly affecting.

Camera Obscura – My Maudlin Career
7/10
A pretty, proper old indie record. String laden, sad pop music that's really well written and well performed. We've only had chance to listen to this once so far but we really really like this record.

Maxïmo Park – Quicken The Heart
7.5/10
Maxïmo are old favourites of ours, and it's safe to say that this is their least brilliant record yet. However it is still full of good songs, from the energetic 'Wraithlike' to the thrusting 'In Another World'. It's definitely a record that's going to get many many airings at KPL towers.

MJ Hibbett & The Validators – Regardez, Ecoutez et Repetez
8/10
MJ Hibbett is easily Peterborough's best music export and a great cult songwriter. This is his latest album with the Validators and is as good as any of his previous offerings. Standout tracks include the single 'Do The Indie Kid', 'We're Old And We're Tired (And We Want To Go Home)' and the epic closer 'Leicester's Trying To Tell Me Something'. All of Hibbett's albums are available from his website, so if you're unfamiliar then it's a good place to go to have a look.

On top of this we've been really digging Flight of the Conchords recently, both the TV show and the music is, we think, completely awesome and hilarious. The DVD of Season One is a must get and we recommend that you do so pretty soon as Season Two is due soon, with a second album on the way also. Another slightly off the wall recommendation is Johnny Cash's American Recordings, which we've been getting into quiet a bit recently. Number IV The Man Comes Around is the best one but all are worth a listen as the man is quiet simply one of the most brilliant and legendary singer-songwriters to have ever graced popular music. Lastly before we leave you, we saw Johnny Foreigner at Fuzz Club in Sheffield last Thursday. We were quiet prepared for them to be good, what we was not expecting however was for them to completely blow us away. Fantastic three piece fight pop from Birmingham, it was right up our street with boy-girl to-and-fro vocals and handclaps. We promplty bought their entire back catalogue and await their new album which is due this year. Go to their myspace and familiarise yourself with them now before we start salivating over their new material.

Keep/Pop/Loud
Posted by Lee at 14:07 No comments: Links to this post