At the beginning of the year we mentioned some new acts that we were most looking forward to this year. Now that we’re a few months in and a few albums have been landing on our desk it’s time to report on the debuts by the two most promising of these acts.

Sky Larkin’s debut album, The Golden Spike is a splendid rural indie affair, chock full of the best type of music possible – that of pop songs performed by a rock outfit. As a three piece pretty much everything comes from the standard set up of guitar/bass/drums/vocals, yet it’s still as fresh as a new book. Katie Harkin’s vocals are quiet simply stunning, and there’s the theme of geography throughout the record, lending it cohesion. In their odd subject matter they may well find fans in the British Sea Power fanbase, yet the frantic drumming and rocking out that they do on occasion may well appeal to fans of more conventional indie music. Whilst there’s not a duff song here it’s also hard to pick out highlights, as each track stands well on its own against the others, however the lyrics to ‘Matador’ certainly warrant mention for their genius. “I am sure that / You’re not a door mat / And I’m sure / You could grow into a matador”. Superb.

Official Secrets Act on the other hand are an entirely different proposition to Sky Larkin, as well as throwing a curveball of an album that is Understanding Electricity they’ve shattered our notions of them completely. Whilst we can’t go into a full review here, we will say that it’s an exemplary record that manages to cover many different styles and genres. In many ways this one feels more like a collection of 7” singles from every era of popular music held together by an elastic band. The vocals manage to sound like an interesting combination of Bowie and Morrissey and the subject matter varies across the album wildly. Again, it’s hard to pick out highlights, but past single ‘No Tomorrow’ manages so accurately to sum up the current economic and social climate. It’s very clever and a million miles away from the standard indie faire of some of their older material.

Posted by Lee at 09:18 No comments: Links to this post

Brakes are a long-term favourite of mine, and on Thursday they came (once again) through Fuzz Club. I managed to have a little chat with frontman and all round nice guy Eamon Hamilton before hand about the new album and American Immigration. He told me that the band are really happy with the forthcoming album Touchdown and that by the time they had got into the studio they were all already very familiar with the songs they were recording.

I agree with Eamon, having got an advanced copy of Touchdown. It’s a brilliant record that flows superbly. The songs are really strong and it overall has the feel of a band that are really settled in what they’re doing. That Eamon got married at the end of last year seems to have had an effect on it and it seems less angry and the love songs are more apparent, not least in the form of ‘First Dance’, the hidden track that was written to be the first dance at said wedding.

The gig was likewise brilliant. Unfortunately there wasn’t as many people there as I’d have liked but the crowd still got going. There was something of a hardcore bunch in the front-middle going as hell for leather as the band, proving that I wasn’t the only person there to have heard Touchdown. I did break my watch during ‘Porcupine or Pineapple’ but managed to find it again (only to loose it again at some point before taking the gig down). The only other bad thing about the set (which saw Eamon dressed in a silver space-suit and Tom mock the crowd for making sexual sounds) was that they had to cut out the encore due to running over.

Still it was a brilliant set, and amongst the many highlights were the playing of ‘Comma Comma Comma Full Stop’ three times in a row, highlight from the new record ‘Don’t Take Me To Space (Man)’, the altering of the words to protest song ‘Cheney’ (“stop being such a dick” changed to a more appropriate “goodbye”) and the epic closing song ‘Oh! Forver’.

There's some photos of the gig to follow, when I can get them sorted.

Touchdown is due out on 20th April. If you can’t wait that long and/or are unfamiliar with their material then Give Blood and The Beatific Visions are both available on Rough Trade Records and are very very good, captivating mixtures of Pixies-esque rock ‘n’ roll and tender country pop.

Keep/Pop/Loud
Posted by Lee at 15:35 No comments: Links to this post 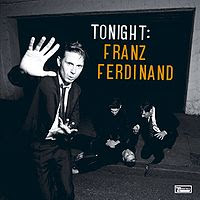 I don’t put a lot of music reviews up on this blog. The chief reason for this is that I write for This Is Fake DIY and a decent proportion of the music that I’d like to write about here comes from them. And whilst I don’t believe that DIY hold the copyright to what I write I believe that it is only fair that seeing as they’re supplying me with the music then anything that comes from it they deserve the to have on their site, and to be linked to

Tonight: Franz Ferdinand however is a record that I’ve shelled out for and therefore see no qualms with putting up my own track by track review here.

‘Turn It On’: Franz by-numbers. Hardly a bad thing but makes no lasting impression. (6/10)

‘No You Girls’: great chorus and some oddly dual-tracked vocals. Dancefloor filler (7.5/10)

‘Send Him Away’: dreamlike with plinky-plonky keyboards and a Hammond organ. (8/10)

‘Bite Hard’: rock song with an acoustic intro. Carried on the keyboards. Perfect for listening to whilst travelling at speed (7.5/10)

‘What She Came For’: comes across as a bit of a filler track to start off with but features and explosive chorus and a fantastic full-on rock-out of closing section
(8/10)

‘Live Alone’: this one’s a dance song. Galloping drums juxtapose with the dreamlike state of the melody. Fantastic (8/10)

‘Can’t Stop Feeling’: percussion that was apparently played on human bones, has an exotic, almost Vampire Weekend feel to it and a really catchy yet odd sounding melody. Definite single material. (9/10)

‘Lucid Dreams’: a bit different from the version that was released last year. Instead of a brilliant yet conventional pop song this comes across as a Daft Punk style remix. Instead of exploding into the chorus the band implausibly stretch this out to a percussion and synth-heavy eight minutes. Bafflingly brilliant. (8.5/10)

‘Dream Again’: the first of two closing slow songs. This one’s the lullaby with lyrics about oceans and mountainsides. (7.5/10)

‘Katherine Kiss Me’: gentle acoustic closer. After some of the insanity that’s passed, it’s the perfect way to close the record. Tonight’s equivalent of ‘Eleanor Put Your Boots On’. Would be nice for this to be a single. (8.5/10)

Overall I think it’s a cracking record from one of the UKs best current bands. There’s a couple of tracks worth of filler which is a shame, but this is more than made up for by the bonus disc of dub mixes. This second disc (entitled Blood) is best listened to after you’ve assimilated the album. Particular highlights are the version of ‘Twilight Omens’ (called ‘Backwards On My Face’) and ‘Feel The Pressure’ (a reworking of ‘What She Came For’). There’s a lot of enjoyment in this disc, listening out for where on the album the song segments come from. The most surprising song on the disc is ‘Vaguest of Feelings’ which comes initially from ‘Live Alone’ but in accentuating the keyboard section propels the song to glacial pop territory.

As a package Tonight / Blood is more than just a good album. Rather it demonstrates why Franz Ferdinand are godfathers of modern band-based pop music and how they are kings of all that they survey.

Keep/Pop/Loud
Posted by Lee at 17:47 No comments: Links to this post